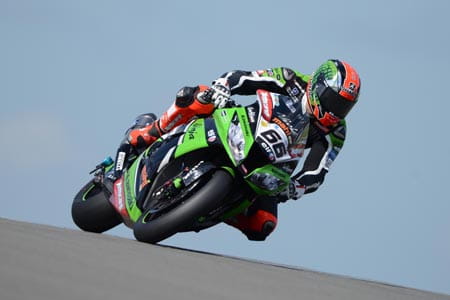 Tom Sykes was a man on a mission this weekend at Donington Park and reaped the rewards, taking home his first double World Superbike Championship win from the track on his Kawasaki.

Race one saw the Brit start from his fourth pole position of the season, but it was Sylvain Guintoli who grabbed the holeshot and leading the field by the first corner, but in the run into Craner curves, it was Sykes who was on top. However, fellow Brit Jonathan Rea didn't let Sykes out of his sights and pushed his Pata Honda to the limit to keep up. In fact, he tried so hard that he broke the race lap record with a time of 1'28.469! Understandably, he couldn't keep the pace up, and his early assault on the race win lapsed half way through race distance, when he was overtaken by Guintoli and BMW Motorrad GoldBet Italia rider, Marco Melandri.

With just five laps remaining, Melandri overtook Guintoli but couldn't quite close the gap on Sykes who now had a two-second lead over the Italian. Rea finished in fourth position and Loriz Baz rounded up the top five.

In race two, Sykes made his mark once again, heading into the first corner with intent and maintaining this lead until the end of the race. Eugene Laverty tried his best to keep up with the Kawasaki but Sykes scored a new race lap record on lap four with 1'28.074. This wasn't enough for Brit boy Sykes, as he increased his gap to an impressive eight seconds by the end of the race.

Guintoli overtook his team-mate Laverty to take second place, scoring him vital points for him to maintain second place in the championship standings.

Third place was still up for grabs and Melandri was all set for his second podium of the day until he ran on over the Esses meaning he finished in fifth place behind Davide Giugliano.

Guintoli still tops the championship leader board with 173 points, with Sykes closing the gap with 169 following his two race wins. Eugene Laverty is third with 149 points and Melandri is just behind with 127, his team-mate Chaz Davies following in fifth with 112.

Despite all of his efforts, Haslam didn't take part in the two races of the day following a decision by the team about his broken leg and Checa was out of race two due to his injured shoulder.