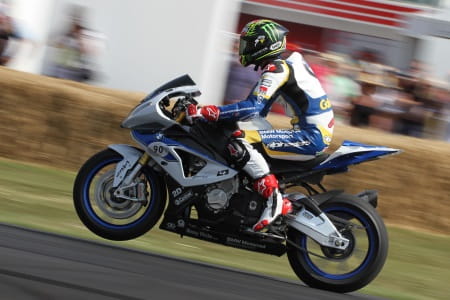 This weekend saw the twentieth anniversary of the iconic Goodwood Festival of Speed, an event for anyone with a love for four or two wheeled motoring. One of the stars at the event this year was BMW Motorrad’s WSBK rider, Chaz Davies who rode the famous hill climb course on BMW’s new HP4 sports bike.

“Goodwood is always an amazing place to be. It’s so much fun to be here, it’s almost like having a little holiday. You have so much here, not just motorcycles from every era but also cars, from a hundred year old to F1. The ball held by Lord March is such a great event, too, it makes the whole weekend a little bit magical” said Davies.

“It’s great to run into lots of riders that I know from World Superbikes – but the real treat is seeing people like Kenny Roberts, Kevin Schwantz and Giacamo Agostini as well. There are true legends from every age of racing, two and four wheels. My bike was in the paddock next to Helmut Dahne, who was on an amazing BMW Classic bike.”

“The HP4 was great to ride. The traction control really comes into its own, as the surface on the Hill Climb is slippery enough, and that’s before you get a hundred years’ worth of old cars and bikes leaking oil all over it! But the HP4 managed to keep on top of it all – and it was a great bike to ride. I did a few wheelies along the way, too.”

“I had a very quick ride on the R 1100 S Boxer Cup race bike, too. I wanted to see what the anti-dive Telelever forks felt like – and they’re very strange at first! But it’s an amazing bit of engineering; it really does improve the handling if you’re braking into a corner. And the Boxer engine was great, so grunty and producing lots of low-down torque. “

“The 90 Years of BMW Motorrad stand was fantastic. I got to explore it on Saturday and the bikes are very cool. I especially love the Concept Ninety. I had hoped they might let me take it up the Goodwood Hill! But it was needed for display of course. Maybe next year!”