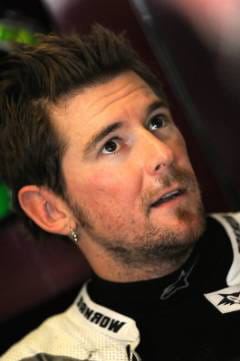 FIXI Crescent Suzuki has confirmed that Australian Damian Cudlin will take the place of Leon Camier at this weekend’s WSBK round at Assen if he is unfit to ride.

Camier suffered an injury to his left knee after a highside during the Friday practice session at the second World Superbike round in Aragon. The accident happened in the fast downhill section of turn 10 and the session had to be stopped while Camier was rushed to hospital.

The decision as to whether Camier will ride will be made later this week at the Dutch circuit. This news comes after Suzuki released a statement saying that Camier is working hard and recovering well following his knee surgery in Spain, with his doctors giving over 50% odds that he will be able to ride this weekend.

Cudlin would compete in WSBK alongside Camier’s team-mate Jules Cluzel off the back of his double win and lap record performance at last weekend’s German Superbike Championship at the Lausitzring, where he was riding for the Dutch-based RAC (Rider’s Against Cancer) Racing Team. Thirty-year-old Cudlin, who has a wealth of experience at top level motorcycle racing, including MotoGP, Moto2, World Endurance, AMA Supersport and the Australian Superbike Championship, will still be heading to Assen whether or not Camier races, as he is scheduled to ride in a WSBK support class.

Cudlin said: “I’m really pleased to have been given this opportunity to step into the FIXI Crescent Suzuki team, if I’m needed. I’ve competed in a lot of championships including MotoGP, Moto2, AMA and of course Aussie Superbikes, but I’ve never had the chance to ride for a top-class WSB team.

“I’m really thrilled to have been asked by Paul and thankful to Geert Prins and the RAC team for giving me the chance to ride for FIXI Crescent Suzuki if the situation arises. Obviously it’s the best for the team if Leon is fit, but if he is not then I will be very happy to step in. If I do get the chance I can’t wait to take it and I’d hopefully do a good job and perform at my best for the team.”