Circuit of Wales to back Danny Webb for Magny-Cours, Jerez 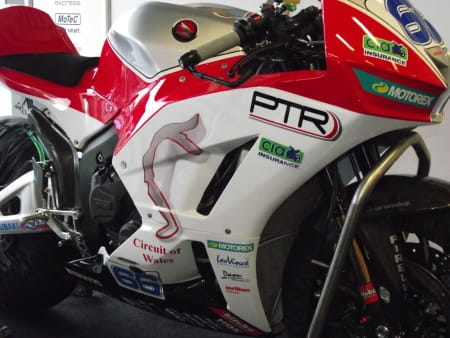 The Circuit of Wales will sponsor Danny Webb's PRT Honda in the World Supersport Championship for the remainding two rounds of the season at Magny-Cours and Jerez.

Earlier this year the Circuit of Wales project, undertaken by the Heads of the Valleys Development Company Ltd, was granted planning approval for a £280m initiative in Blaenau Gwent. The state-of-the-art complex is due to be completed in 2015/16 and is designed to host international motorsport events and will be a centre for motorsport-related industries.

Webb moved from Moto3 into World Supersport with Simon Buckmaster's PTR Honda squad earlier this year. Magny-Cours is his third round with the team.

“This is such an exciting project for British motorsport and I am honoured that Circuit of Wales have chosen to support my World Supersport programme" commented Webb.

"I can’t wait to show off the bike’s new livery and start contributing to this amazing project.”

Michael Carrick, Chief Executive of the Heads of the Valleys Development Company Ltd added: "We are delighted to be able to work with another exciting young prospect like Danny. He is a gifted rider with a bright future ahead of him. We also continue to work with other British motorsport talent such as former World Champion Chaz Davies and WSB rider Leon Haslam who have contributed enormously to the design and performance aspects of our circuits. We will continue to explore further opportunities to support our existing and emerging talent in the coming seasons across different performance motorsports."

We are committed to nurturing and creating opportunities for Welsh and British motorsport. Joining Danny in the World Supersport Championship is another fantastic way for us to demonstrate our continued support for home-grown talent and our desire to help develop a new generation of British racers.”

MotoGP's Carmelo Ezpeleta has supported the circuit since its proposal and it's largely expected MotoGP could be there from 2015.