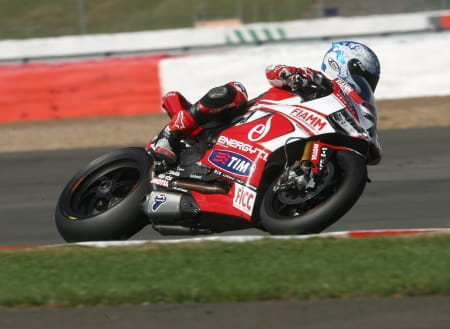 Despite taking pole in the first race at Phillip Island back in February, Carlos Checa has had a miserable first half to his World Superbike season, with a best result of sixth, currently sitting just twelfth in the championship. Testing in Misano in early June, Checa was reportedly lapping at record pace and at the following round in Moscow there was a marked improvement for the Spaniard, putting his 1199 into the top five in several sessions. Unfortunately for Checa, luck wasn’t on his side in Russia as he was held back by two crashes which were no fault of his own. We caught up with the Spaniard to get his take on it all:

Your pace in Russia was the best it’s been all season – you were looking very much like the Carlos Checa who can win races, what changed for Moscow?

We have been working flat-out all season and I think what made the difference in Russia was a new setting and slightly higher riding position, something we identified during testing in Misano. I had more confidence with the bike set up this way and was able to push harder, at least in the dry. Unfortunately, it wasn’t so easy in the wet.

The Ducati Panigale is very different to any previous Ducati. How do you find the new bike compared to the 1198?

It’s a very different bike, a totally new concept. While previous Ducati superbikes have been an evolution of the one before it, the Panigale is a complete revolution. In many ways I was starting over, as if on a new bike for the first time. After several seasons on the old bike, when I tested it last year I knew it would be a big project and would take time. It’s not been an easy season but I will continue to give it my all and hope we can improve step by step.

There are still a lot of races to go this season, do you think you’ll be able to get back onto the top step of the podium in any of them?

I always take it one race at a time, it’s impossible to make predictions, especially this season with the amount of fierce competition. Our goal is to continue to work steadily in order to have a mbike which can return to the top.

What are you expecting from the new rules for 2014?

We don’t officially know what the new regulations will be yet. I know that we need to keep good numbers on the grid and to do this we must reduce costs. If new rules mean that we move more in the direction of Superstock bikes then I don’t think this would be a bad thing. It would bring everyone more in line and perhaps more small teams would be able to afford to take part without having to worry about having a big enough budget for complicated electronics etc. We already have one very hi-tech championship and that is MotoGP – so if Superbikes were more in line with the production bikes then I think both championships could continue to work.

Have you had any thoughts about your plans for 2014?

To be honest, I don’t know. I don’t like to plan ahead and we’re still only mid-way through the season with many races still to run. I’ll probably not look ahead to next year until later in September.