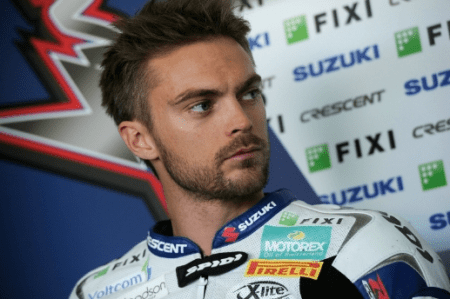 Crescent Suzuki are one rider short this weekend so the pressure will be on new rider for this year, Jules Cluzel after his team-mate Leon Camier is declared out of the Superbike race at Aragon.

It's bad luck for the FIXI Crescent Suzuki team who were running well, with their lap times in free practice on Friday looking competitive.

Following a huge high-side during the first qualifying session on Friday afternoon, Camier suffered severe trauma to left knee which took the brunt of the accident.

Leon has had successful surgery on his knee and more will be known about his condition when annouced by the team. It has been revealed that he will need to spent a minimum of five days in a splint while his wound heels but he is hoping to be fit and well for Assen later this month (27-28 April)

Leon is understandably frustrated but happy that no bones were broken:

“To be in the hospital and kept away from the race due to a flesh wound is boring and extremely frustrating to say the least. Having said that, I guess I should be thankful that nothing is broken as it was a pretty big impact. My frustration is made so much worse because the bike was feeling good, the lap-time was coming easily and I know we could have had a good fight this weekend.

“I’ll be doing everything I can to be back at Assen, it all depends on how the surgery heals. I just hope our luck changes and that we can get back out there to give the team a result.”

Team Manager, Paul Denning, takes a philosophical view of the accident and said this yesterday, before it was decided that Leon wouldn't race tomorrow:

“There are two ways of looking at the result of Leon’s crash today and we should be grateful that his injuries aren’t worse, because it was a massive impact. That said we’re naturally hugely disappointed that it looks like he won’t be able to race this weekend due to the severity of the open cut to his knee. It looks like it is going to require a lot of maintenance, cleaning and ongoing checks to ensure no infection sets in, and that a more serious complication doesn’t occur. The rider’s health is the priority, but we’re equally disappointed because Leon had only made three laps - and used only the harder rear tyre – and still his lap-time was very competitive. The performance potential was very positive here following the test, so it looks like it will be a case of what might have been!

We, along with the Crescent Suzuki team, wish the Brit lad a speedy recovery!