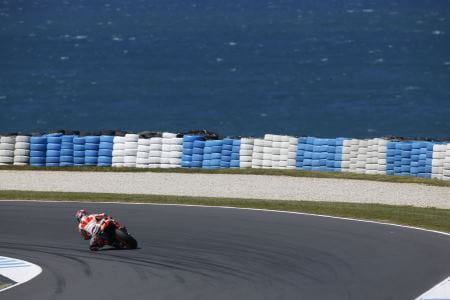 A select number of MotoGP and Moto2 riders will head to Phillip Island next week to undergo testing for the respective tyre manufacturers in each category. Bridgestone and Dunlop came under fire at the Australian Grand Prix last year after it became apparent following a day of Free Practice that the tyres were unlikely to last full race distance.

Phillip Island was resurfaced towards the end of 2012, but with no testing at the Australian circuit the first time Grand Prix motorcycles took to the resurfaced track was during Friday practice. With tyres blistering after a short number of laps, the Moto2 race distance was halved and a compulsory pit-stop for tyre changes was enforced during the MotoGP race for safety reasons.

The unprecedented changes in the MotoGP race saw a lot of drama, including championship leader Marc Marquez being disqualified for failing to stop within the given window and both MotoGP bosses and the tyre manufacturers came under fire from multiple directions.

To ensure all races can run full distance at this year’s event, a number of riders will be present at Phillip Island for a tyre test between 3-5 March. Moto2 tyre supplier, Dunlop will take nine tyre specifications to be tested by four riders.

"Since the race in October, Dunlop's design and manufacturing teams have focused on the development of compounds and constructions that either generate less heat, or are more resilient to heat in long fast corners in hot conditions” explained Dunlop’s Design and Development Manager, Nigel Nock.

“Our objective is to work through the nine test options in order to select two specifications that can operate across the wide range of track conditions that we could experience in October this year'.

For Bridgestone, all representatives of the 2014 factory Yamaha, Honda and Ducati teams will be present with the exception of Marc Marquez who broke his leg last week in a flat-track incident. Those present at the Phillip Island tyre test are expected to miss the final pre-season outing at Qatar two days later.

There will be no Moto3 representation at the tyre test, with Moto3 the only class not to suffer from tyre issues at the 2013 Australian Grand Prix.