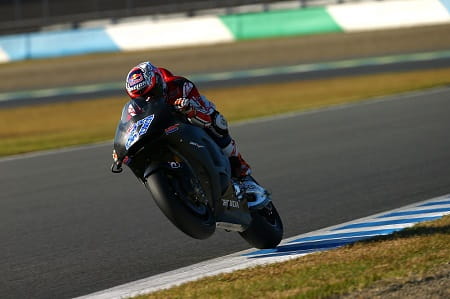 Stoner hadn’t ridden a MotoGP bike since last October when he tested the Japanese marque’s RC213V and new production racer back to back and had decided to sit out of testing activity for 2014 to spend more time with his family but it’d seem Honda managed to twist his arm and get him back on the bike. He spent two days testing the 2015 prototypes at Honda’s Motegi test track, the scene of Marc Marquez’ title victory three weeks ago. 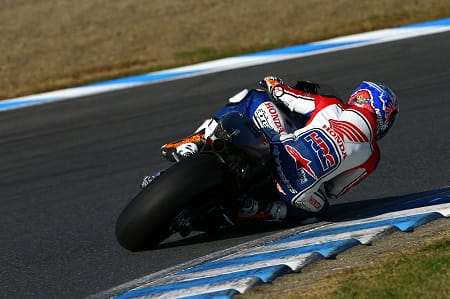 Blessed with two days of good weather, the Aussie compared the set-ups of Marc Marquez and Dani Pedrosa on the 2015 RC213V and tested various other components. On the second day he rode with 2016 specification Michelin tyres ahead of the French firm taking over from Bridgestone as the sole MotoGP tyre supplier at the end of next season.

“It took some time to get used to riding the bike again after a year off it!” Stoner said. “But everything felt good, I got back into the swing of things pretty quickly and we just got on with the testing programme HRC had planned. Day one went pretty well, testing both Marc and Dani’s setups on the 2015 prototype machines and analysing these side by side we found some interesting differences and useful data. We also did some engine development and some other new items Honda brought for this test. Then today we spent some time on the Michelin tyres for 2016. All in all it was very positive two-day test and we completed a lot of laps.”