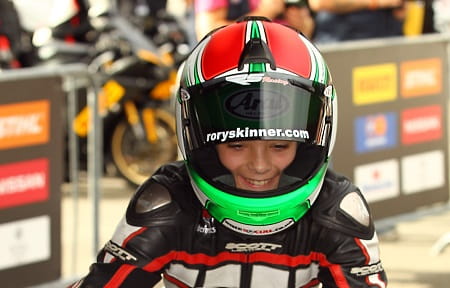 Bike Social-backed Rory Skinner has been selected as one of just twelve riders chosen to compete in the 2015 Red Bull Rookies Cup, a one-make series for promising young racers which follows the prestigious MotoGP World Championship around Europe.

This year Skinner competed in and won the renowned Aprilia Superteens championship, previously won by Grand Prix riders such as Cal Crutchlow and Casey Stoner. He also made two wildcard performances in the European Moriwaki cup, scoring a podium finish at his first ever visit to Assen.

Skinner was invited to take place in the Rookies selection event at Guadix circuit in Spain the other week. The event put the youngsters through their paces across two days, with numbers whittled down across the two days until just twelve were chosen to take part in the 2015 season.  We caught up with the 13-year-old to find out more.

“On the first day you had the first session to learn the track and learn the bike” Skinner explained.  “You got given a different bike every session so you had to learn all the time. In the second session we had to go out, see what conditions were like as the weather was a bit on and off and the track was quite cold from rain the day before, and ride our best to see if we’d be chosen for the next day.

“They had three people out on the track watching how we were taking the corners, how we were going in, using the engines, making sure we weren’t over-revving them and stuff like that. After that they choose a number of riders to go through to the second day and thankfully I was one of them!

“On the second day we were given a different bike again, spent a little bit of time on the track in the first session before going out again for the final session, which was the final session you had to show yourself and what you can do. I went out and tried my hardest and thankfully I got through.”

Skinner will be riding world famous circuits alongside racing heroes such as Valentino Rossi and Marc Marquez in the MotoGP paddock, something Skinner says he’s looking forward to. 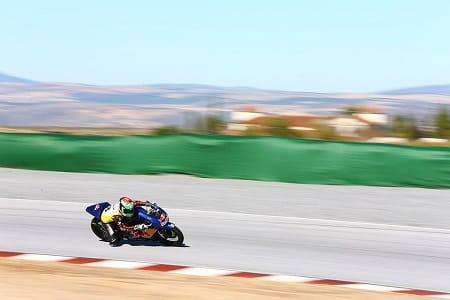 “It hasn’t really sunk in yet, I don’t think it will until the first test next year when we see all the leathers and the bikes!” the Scotsman continued. “I can’t wait to go to all the MotoGP tracks and follow MotoGP. I’m really looking forward to riding Jerez in particular; a lot of people I know have said that it’s an awesome track.

“I’m really looking forward to the British Grand Prix at Donington. I think that could be my best result but of course I hope to get other good results too. I’ve ridden Donington before and it’s one of my favourite British tracks. “

The series runs 4-stroke Moto3-spec KTM RC250R machinery and riders can participate for a maximum of three years.

“I think there will be a lot of quick riders across the season, there are second and third year rookies in the class and they now know all the circuits. I don’t know what our aims are, we’ll see when we get there and set our targets from there.”