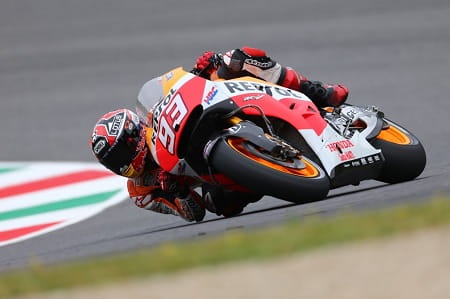 Marc Marquez has taken his sixth MotoGP victory in succession this afternoon in Mugello but a resurgence from Yamaha's Jorge Lorenzo saw the 2013 World Champion fight for what he says was the 'hardest win of the year'.

It was Andrea Iannone's Pramac Ducati shooting into the lead off the start and into turn one, as Jorge Lorenzo barged into second place from third on the grid, nudging Ducati's Cal Crutchlow out wide. Polesitter Marc Marquez made a move on Jorge Lorenzo half way into the first lap but Lorenzo shoved it right back underneath his fellow Spaniard before forcing his way past Iannone to take the lead. Sensing his chance, Lorenzo put the hammer down in attempt to pull a gap while he could with Marquez stuck behind Iannone.

When Marquez eventually passed Iannone, Lorenzo had pulled a lead of almost a second with his Yamaha team mate Valentino Rossi moving into third place after starting tenth on the grid. It wasn't a great race for leading Brits Bradley Smith and Cal Crutchlow crashed out on laps three and four respectively with Crutchlow's bike then wiping out Stefan Bradl. 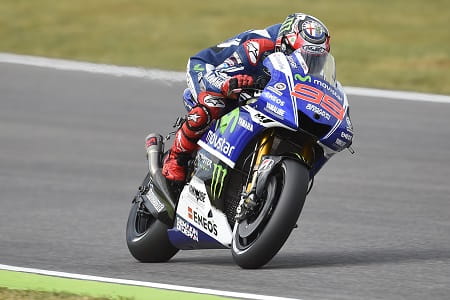 Within a couple of laps, Marquez had chased down Lorenzo and was glued to his rear end for the next ten laps. After an awful start, Dani Pedrosa was fighting through the field and took fourth from Andrea Iannone on lap twelve.

Marquez made his move coming into lap sixteen, streaming past Lorenzo's Yamaha on the straight but immediately the spaniard looked uncomfortable in the lead. The pair brought out the handbags into lap seventeen with Lorenzo re-taking the lead. Battle ensued between the pair with Marquez pulling into the lead again on lap twenty with Lorenzo close on his tail.

Lorenzo pushed past Marquez into the penultimate corner to take the lead with two laps to go, desperate stop Marquez leading into the straight knowing he could pull a gap using the Honda's superior straight line speed. Marquez pulled his usual move on the straight into the final lap, managing to keep position despite going wide into turn one. Despite his best efforts, Lorenzo had no answer for Marquez on the final lap, the reigning champion taking his sixth successive win. Rossi crossed the line third in his 300th Grand Prix ahead of Dani Pedrosa.