Seventh win for Marquez after intense battle in Catalunya 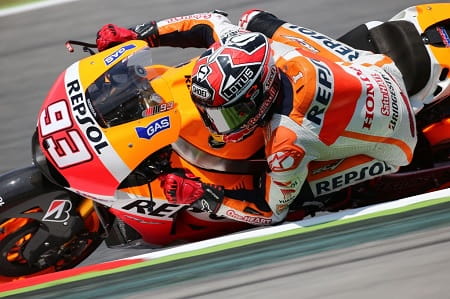 Marc Marquez continued his 2014 winning streak in Catalunya today taking his seventh successive victory this season. However, the Spaniard faced his toughest challenge yet with an intense four-man battle for the lead during the last seven laps.

A first mistake of the season saw Marquez crash out of qualifying on Saturday, leaving him third on the grid but that didn’t stop the Repsol Honda man come Sunday. It was Jorge Lorenzo into the first corner first followed by his team mate, Valentino Rossi, who launched off the second row of the grid.

Lorenzo struggled to fend off the chasing Repsol Hondas of Marc Marquez and Dani Pedrosa but Rossi seemed to be able to run a similar pace, remaining ahead of the pair until six laps to go with the exception of an instance in which Marquez and Pedrosa overtook the Italian under yellow flags.

It was Marquez who finally got the better of Rossi, although as would be expected the Italian veteran fought hard to maintain position. In the end it wasn’t enough, with the Honda able to outpace the Yamaha on the long straights. 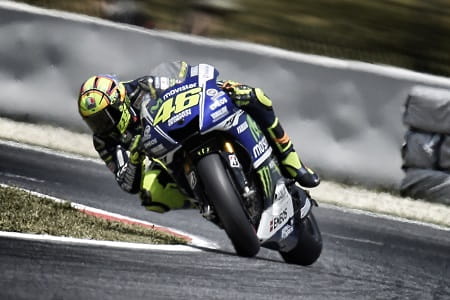 Jorge Lorenzo seemed to drop off the pack as the leading trio put the hammer down on the final few laps. Pedrosa had passed Rossi for second and looked to be the fastest of the Honda pairing. Lining up a move on the final lap, the Spaniard went in too deep and was forced to sit his RC213V up, clipping Marquez’ wheel in the process. Fortunately disaster was averted but Pedrosa lost position to Rossi, who was unable to get near Marquez in the final few corners.

Jorge Lorenzo crossed the line fourth, six seconds ahead of Stefan Bradl with Aleix Espargaro rounding out the top six in his home Grand Prix. The younger of the Espargaro brothers, Pol, took seventh ahead of Dovizioso and Iannone. Bradley Smith finished tenth.

Britain’s Cal Crutchlow retired from the race on his Ducati Desmosedici while Scott Redding crossed the line twelfth and top production just three tenths ahead of Nicky Hayden.