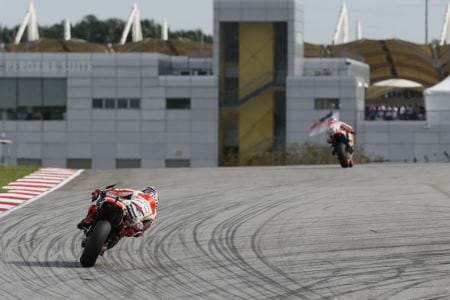 It would seem Marc Marquez has started 2014 as he means to go on by topping Day 1 of the first Sepang test by over half a second from Valentino Rossi in second place.

While it’s early days, Rossi’s initial performance will be encouraging for the nine-time champion, finishing the first day two tenths ahead of team mate, Jorge Lorenzo who set the fourth fastest time. Dani Pedrosa was sandwiched in between the Yamaha pairing, a tenth slower than Rossi.

Alvaro Bautista set the fifth fastest time, almost a second off Marquez with Stefan Bradl less than a tenth behind him.

The new Open Class bikes have made a good start to the test, particularly Aleix Espargaro in seventh on his FTR Yamaha ahead of all of the factory Ducatis and both satellite Tech 3 Yamahas. Pol Espargaro came out on top in the Tech 3 fight in ninth, two tenths ahead of team mate Bradley Smith.

The fastest production Honda RCV1000R was Nicky Hayden in seventeenth, some three seconds off the pace followed by team mate Aoyama with Scott Redding twenty-first on his Gresini RCV1000R a further second back.

Randy de Puniet set the nineteenth fastest time aboard the Suzuki test bike. Brit Michael Laverty was twenty-fifth, almost six seconds off the pace while Leon Camier is absent from the first test.