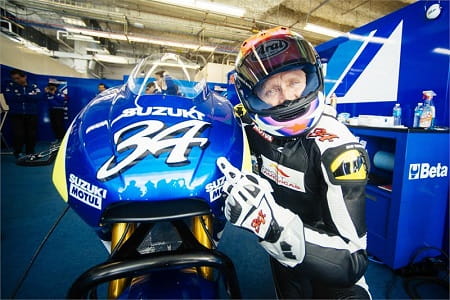 Schwantz, who came out of retirement last year to race the Suzuka 8hr, won the 1993 Grand Prix World Championship with Suzuki, the manufacturer’s second to last world title. Eight years after he last rode a Grand Prix motorcycle, Schwantz completed 11 laps of the Circuit of the Americas on Suzuki’s new Grand Prix bike, which is being developed ahead of a return to MotoGP next year.

Schwantz was also testing the Yoshimura Suzuki GSX-R1000 he will compete in the 2014 Suzuka 8hr race. “I went on the MotoGP machine after riding the GSX-R1000 Superbike and it felt like going from a 500cc to a 250cc bike; the MotoGP machine is so small and compact!” said Schwantz after his ride. “The bike turns, accelerates, goes fast; it does everything and I had fun and really enjoyed it. 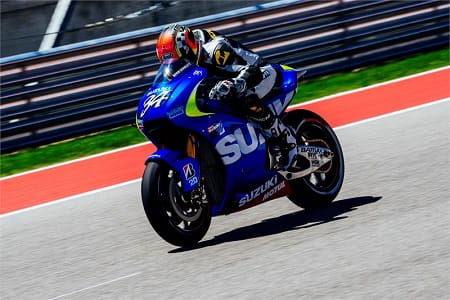 “With this bike you have power and braking so you brake and accelerate and the bike does all the rest. I think Suzuki should race now - the sooner the better! You can test a lot but in the race you really understand.

“After having ridden the MotoGP machine, I now appreciate much-more the GSX-R and I want to continue to work on that now to prepare for my race at Suzuka in July. So tomorrow I will only ride the GSX-R.”

With track and air temperatures much cooler than the weekend’s MotoGP second round – and with Monday’s opening day hit by heavy rain and dirty track conditions – Suzuki MotoGP Test rider Randy De Puniet completed 56 laps with a best lap-time of 2’06.41. The team spent a lot of time in the morning session testing new chassis settings and also adjusting the gearbox for the team’s first test on this new-for-them circuit.