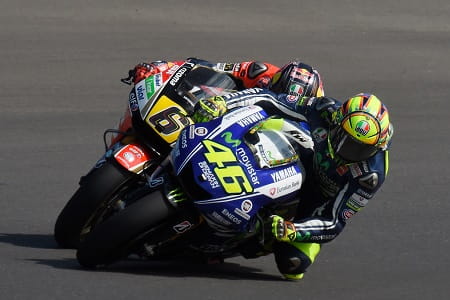 Valentino Rossi has said he could have been on the podium in Argentina had it not been for Stefan Bradl punting him off the track early in the race.

The Italian got off to a decent start in Sunday’s race, even taking the lead for a brief moment on lap two before going wide and losing a couple of places. Unfortunately for Rossi, a group of six riders were battling for the lead in the early stages and the Italian became tangled up with LCR Honda rider Stefan Bradl as the German dived up the inside of Rossi’s Movistar Yamaha, pushing the Doctor out wide.

Rossi claims the Bradl incident lost him two seconds and with the Italian finishing less than two seconds behind his team-mate, Jorge Lorenzo, in third he believes he could have been on the podium had the incident not happened.

“I had the potential and the pace to end on the podium and especially to fight with the three guys in front” said Rossi.

“Unfortunately in the first laps first of all I made a mistake and lost a bit but the place I lost some more was when Bradl made a mistake. He arrived too deep in braking and he pushed me out of the track and I lost two seconds on that lap and so the podium.”

Rossi currently sits third in the championship standings, some 34 points behind championship leader Marquez. The 2014 MotoGP season resumes this weekend in Jerez.

Do you think Rossi could have been on the podium had the incident with Bradl not happened?