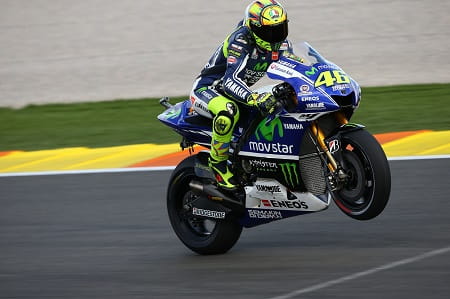 Valentino Rossi has taken his first MotoGP pole position in over four years. The ‘Doctor’ stormed to pole this afternoon in Valencia with a time of 1’30.843 ahead of Ducati’s Andrea Iannone and the Repsol Honda of Dani Pedrosa.

After topping all four free practice sessions, World Champion Marc Marquez was a clear favourite for pole and looked on course to take it until he low-sided his RC213V at turn four with two minutes of the session remaining.

This left Iannone in pole position until Rossi’s final lap saw him shoot to the top of the timesheets. Only Dani Pedrosa was running pace strong enough to topple the Italian, but his lap disappeared in the final sector and the Spaniard remained third.

Tomorrow will mark the first time Valentino Rossi has started in pole position since Le Mans in 2010, the round before he broke his leg at Mugello. It is also his 50th premier class pole.

Jorge Lorenzo will line up on the second row ahead of Marquez and Pol Espargaro. Britain’s Bradley Smith and Cal Crutchlow will start seventh and eighth respectively while Scott Redding just missed out on Q2, qualifying 14th overall.