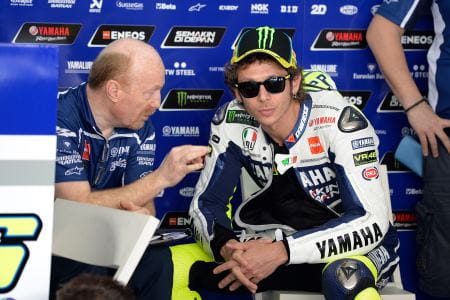 Valentino Rossi has said he’s very happy after setting the second fastest time in this week’s MotoGP test in Sepang. Rossi’s time of 1’59.727 was just 0.196sec off Marc Marquez, who broke Casey Stoner’s 2012 lap record of the Malaysian circuit.

After struggling to get on the podium for most of last season, Rossi’s test performance is impressive, with the Italian setting his career-best lap time of the Sepang International Circuit. There were few times last season (at least when Lorenzo was without injury) that Rossi outpaced Lorenzo but the Italian outpaced his younger team-mate in each of the three days of this first test.

Rossi wasn’t far off the pace from the start of the test, stating on the first day that Yamaha and his team had found solutions for the braking problems that had plagued them throughout last year. Rossi admits that he struggled to maintain the pace during a race simulation this afternoon, although extreme temperatures, which slowed many riders, may be the reason for this.

“The test has been very good, I’m very happy, especially for the second position and more than that for the lap time which is the best of my career in Sepang” commented Rossi.

“It’s the first time under 2’00 for me and just one tenth from Marc and the overall record of the track. I found a good feeling with the bike, we found some good solutions and it’s been very positive. We tried a simulation in the afternoon that was very good to understand any problems. We suffered a bit to keep a good pace but it wasn't so bad. For the first test the balance was good.”