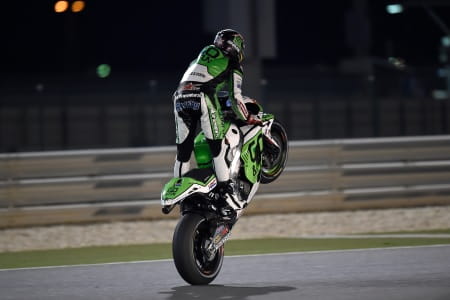 Britain’s Scott Redding made his debut in the MotoGP class this weekend in Qatar and what a debut it was, with the Bike Social-backed rider finishing seventh and top production Honda. Redding faced a tough challenge this weekend with the RCV1000R much slower than the other bikes. Damage to his front wheel-sensor in qualifying led to sudden cuts of power during Saturday’s qualifying session, leaving him 16th on the grid but that didn’t stop him come race day.

Pushing the soft tyre early on, Redding caught up with 2006 World Champion Nicky Hayden around mid-race and managed to pass him when Hayden made a mistake. With the American also riding an RCV1000R, Redding’s target was to finish as close to Hayden as possible. When the Aspar rider came back at Redding towards the end of the race, the Brit fought hard to retain his position.

“The race went really well, I was quite good off the start and used the soft tyre to my advantage. I settled in behind Nicky [Hayden] and felt quite comfortable” said Redding, speaking exclusively to Bike Social.

“I was looking to stay with him for 5-10 laps but I felt really comfortable and when I passed him again towards the end of the race I thought why not try and beat him. I got my head down with the aim of being the first production Honda and got the job done.” 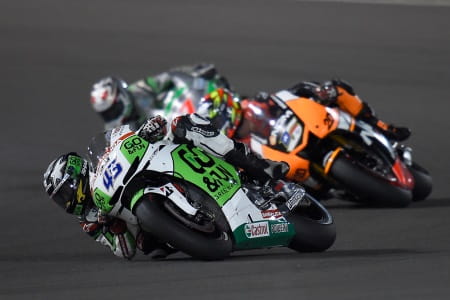 Redding and Hayden had originally been scrapping for tenth place but following crashes from Bradley Smith and Alvaro Bautista, plus Pol Espargaro retiring with a technical issue the pair were elevated to seventh and eighth.

“Seventh isn’t really a true result because all the people who crashed would have beaten us anyway. My main priority was to go with Nicky and I managed to do that so I’m happy. Yeah I’m happy with seventh as all I wanted was to be in the points but that’s not really our target for this year as we don’t have the machinery capable of that at this moment.”

Honda’s production racer is massively down on power, with Redding around 15mph slower than the fastest bikes on the grid. Rumours surfaced this weekend of an engine upgrade for the RCV1000R from Jerez onwards but Redding says that’s not the case as far as he’s aware.

“We’re always going to struggle with speed at the moment as we’ve got quite a bit power deficit. From what I know there isn’t a plan for an engine upgrade yet. Maybe after this race and a few more they will see how we’re doing but it’s complicated as all the rules keep changing. Honda isn’t going to waste money on development until they are sure what they want to do.

The soft tyre gives us a good advantage on the corners but we lose so much to everyone else on the straights and towards the end of the race the tyre drops off so much.” 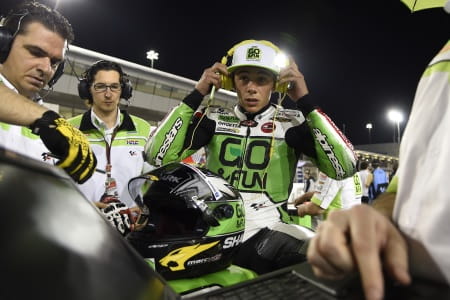 Stepping up from Moto2 this year, Redding is glad to finally be riding a bike more suited to his size but knows he has a lot to learn. With the Brit following Nicky Hayden, a rider with vast experience in MotoGP, for some of the race, Redding says he was able to learn from the former champion and that battling with the American gave him a boost in confidence.

“I like the bike, the extra power compared to Moto2 is great and the tyres have got more construction which helps me a bit and the stronger brakes are good too. To race with someone like Nicky and not have a big disadvantage in the straights helped a lot with my confidence. All weekend I’ve been sticking with riders all around the track only for them to pull a gap on the straights but I didn’t have that with Nicky as he’s on the same bike.

Racing with Nicky was a good experience, I learned a few things from his style but with the experience he has I was expected him to be strong at the end of the race. I actually thought he was playing with me a bit but it turns out he wasn’t. So I’m quite happy, I managed to learn a few things while behind him and then beat him!”

The MotoGP circus now moves on to Austin, Texas for the second round of the championship to take place between 11-13 April and despite the positive result in Qatar, Redding’s head is firmly on his shoulders ahead of the next round.

“There’s a lot to take from this but we can’t be too complacent moving forwards, every track is different and the conditions are different, we might have to use the hard tyre and it could be a completely different story. My target this year is to beat Nicky and yeah I’ve already done it once but I’m sure he’ll be working hard to come back at me in the next race.”