Redding: I held the bike up on my knee and elbow at every right-hander

We spoke to Scott Redding after the MotoGP race in Texas, USA who gave us his views on Lorenzo's jump start, how he had to manage the degrading front tyre...by using his knee and elbow to steer the bike, what he's still go to learn in MotoGP and how he'll approach the next Grand Prix at the brand new venue of Argentina. 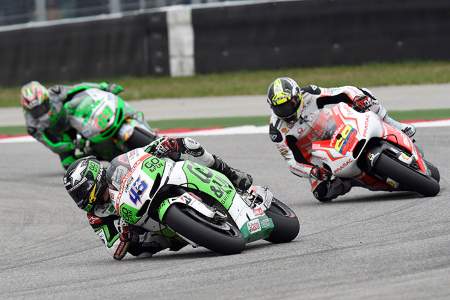 Go&Fun Gresini Honda's rookie star, Scott Redding, ended a promising looking weekend on the floor with only two laps remaining of the second round of the world championship at the Circuit of the America's (COTA), Austin, Texas. Whilst naturally disappointed, he remained upbeat about his performance, especially during qualifying.

A problematic front tyre had plagued Redding throughout the 21-lap race causing him to drop back behind his 'benchmark' Nicky Hayden and despite running on old front tyres throughout the weekend and suffering no ill effect, a problem with the brand new race tyre resulted in Redding sliding out of contention with only two laps to go. Thankfully he emerged un-injured.

The 21-year old from Gloucestershire began the season three weeks ago better than perhaps even he expected with a 7th placed finish at the opening round in Qatar.  His strong performance on the under-powered Honda RCV1000R continued into the weekend at COTA as he continuously lapped quicker and quicker than the other production Honda's through the practise and qualifying sessions despite having only raced at the circuit on his 600cc Moto2 bike last year. 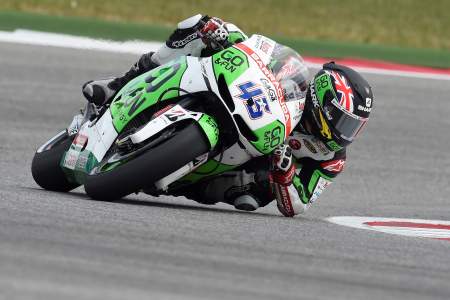 Redding qualified in 13th place but a place on the inside if the 5th row didn't do his performance any justice because he came oh so close to causing an upset and making it through to Q2. While Aleix Espargaro was relaxing in his pit garage thinking that he'd done enough to make it through, up popped Redding in the final few seconds of the session and as the lap unfolded Espargaro's faced dropped. Redding was fastest of all though the first two sectors but it fell away in the final sector and the Spaniard held on by just 0.074. He then went on to qualify as the first Yamaha, in 4th place.

Redding said, "The lap felt pretty good except the last two corners which weren't perfect but I didn't expect a 2.04.6. We did it with the soft tyre but so was the previous lap yet we took off over half a second. I was using quite a lot of power to get through the first sector, turns 2-9."Redding qualified in 13th place but a place on the inside if the 5th row didn't do his performance any justice because he came oh so close to causing an upset and making it through to Q2. While Aleix Espargaro was relaxing in his pit garage thinking that he'd done enough to make it through, up popped Redding in the final few seconds of the session and as the lap unfolded Espargaro's faced dropped. Redding was fastest of all though the first two sectors but it fell away in the final sector and the Spaniard held on by just 0.074. He then went on to qualify as the first Yamaha, in 4th place.

58,000 were at the circuit on race day as the reigning world champion Marc Marquez cleared off at the front. His only slight inconvenience was having to follow the jump-starting Jorge Lorenzo around the first lap. The remainder of the grid behaved through the iconic uphill left-handed hairpin at turn one although several were clearly perplexed by witnessing one of the clearest jump starts they'll ever see.

Did the Lorenzo jump start affect you? "No, I never look at anyone else at the start, it's too easy to jump if someone else does so I focus on the lights."

"I've been struggling with the starts on this bike, each time the clutch is different, it's not consistent.  After the first lap I'd made my positions back again. I was a bit aggressive in turn two and round six and seven and got by Hernandez going into the corner before the back straight but he got me back down the straight, that kind of messed up my rhythm. If he wasn't there I think I could have held onto Espargaro for a few laps which would have been good for us. But Hernandez kept passing me on the straight so I was killing the tyre in the corners to get him back."

Rossi, Crutchlow and Iannone also suffered with tyre wear during the race but how did your issues come about, at what point did you know something was up? "A few guys had tyre problems but because I'm bigger, taller and ride a lot on the front tyre I suffered the most. By lap 7 I could feel it going, it was the right handers, I couldn't keep the corner speed up or turn the bike, it would take three attempts to get round turn 16. I kept holding the bike on my knee and elbow and having to pick it up. From then on the front kept ploughing in so I had to use my knee and my elbow all the time. When I crashed, the tyre had finally given up. There's not much left of my knee slider!" 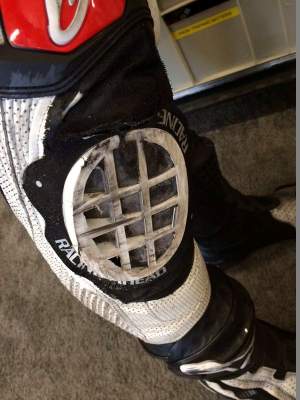 That was only your second MotoGP race but what are the key things that you're still learning? "Yeah, I'm still learning race craft and heat cycles of the brakes, there are so many things that I'm learning without realising but race craft, that's the biggest thing that's going to take some time. Like Marquez said, he didn't push around 16, 17 and 18 because of the tyre issues he had last year but I didn't have that experience. He was saving it from the beginning. I didn't think there was any problem with the tyres, you don't get that level of detail from the outside but I now know for next year." 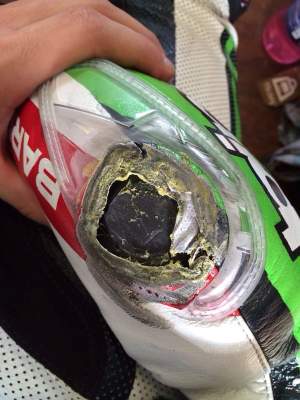 How will you learn the Argentina track? "I'll rock up on the Wednesday, take a walk around the track or grab a scooter. I'll study the circuit map but there's not a lot you can do at walking pace or at 30mph on a scooter instead of 150mph. The best thing is to get your down in practise and learn it as quick as you can which is one of my strengths."

Your team mate, Alvaro's Bautista, was at the official test last summer, will you get to see any of his data or learnings? "No, we won't get any of the Bautista knowledge from last year, it's a different bike and each rider has a different perspective on how a track rides. One might say it's fast but bumpy but another might not agree."

With Bautista making unforced errors and coming off in both races so far, what are your chances of getting a ride on his bike? "That would nice, to have one race weekend on his bike. We'll have to see how the season goes, I'm getting closer and closer now, he seemed to be struggling a bit."

But before Argentina (25-27 April), the fitness fantatical Redding heads to where all real men go when they're in Texas...the Colin Edwards 'Texas Tornado Boot Camp', to "slide around on dirt bikes and shoot some bullets".

Should Redding have Bautista's ride?  To leave a comment,  or !