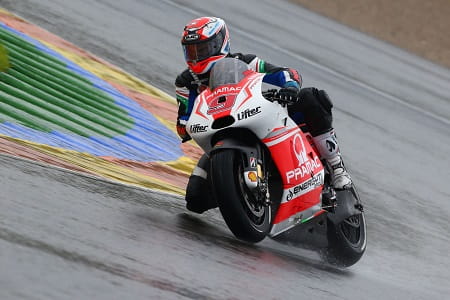 The second day of MotoGP testing in Valencia was a wash out with just ten riders venturing out onto the sodden Ricardo Tormo Circuit.

Danilo Petrucci set the fastest time aboard the Pramac Ducati ahead of Nicky Hayden and Scott Redding.

Yonny Hernandez was the first to brave the conditions followed by Loris Baz on the Forward Yamaha. Reigning World Champion Marc Marquez also completed a few laps in the morning.

Cal Crutchlow had his first crash on the LCR Honda as he low-sided on his first lap just after lunch time, but he wouldn’t be the only rider to go down. Ex-World Superbike man Loris Baz took two tumbles in the afternoon, the second of which leading him to the Clinica Mobile with minor burns to his neck.

Eugene Laverty put in a short stint on his RCV1000R to get a taste of Bridgestone’s wet tyres with team mate Nicky Hayden also venturing out on the old-spec production Honda. Hayden later went for a quick shakedown on the RC213V-RS ahead of what will hopefully be a dry final day tomorrow.

Other riders on circuit included Valentino Rossi and the Aprilia duo of Marco Melandri and Alvaro Bautista.