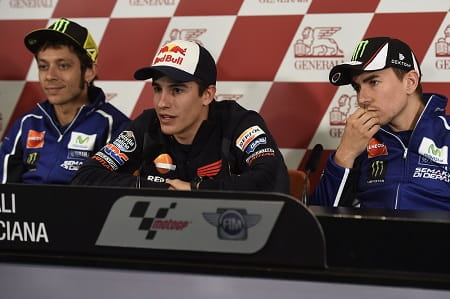 The top three riders in this year’s MotoGP standings all acknowledged the necessity of team orders in motorcycle racing today when asked about the recent saga in the World Superbike Championship.

Tom Sykes and Loris Baz came to blows on Twitter after the final round of the season in Qatar where Baz ignored an order from his Kawasaki team to allow Sykes to take second place from him in the first race. Baz’ refusal meant Sykes lost a further four points to championship rival Sylvain Guintoli meaning he’d need to beat him to take the title in the next race. The Briton was unable to do so and left Qatar as runner-up.

Speaking ahead of the Valencian Grand Prix this weekend, Marc Marquez, Valentino Rossi and Jorge Lorenzo were all asked to pass comment on the events in Qatar with all three admitting that riders should respect the decision of their team.

“I was watching the race at home on the sofa” said MotoGP World Champion, Marc Marquez. “It’s difficult to say because with team orders, some people agree and some people don’t. In the end, when there is one factory, with one project and one goal, if they think we need to help our team mate we need to respect that decision. It is very difficult. We are riders and if you can finish second you don’t want to finish third but if a factory has given you a lot it is important to respect their decision. The factory invests a lot of money for this one thing and they could lose that because of one mistake by a rider.  Maybe I will be in this position someday, so for that reason I will say no more!”

Valentino Rossi added: “Team orders are always very bad in general but at the end of the championship they can be very important. They can make the difference for a factory that has spent a lot of money trying to win. In Superbikes it was interesting because it happened in both teams, in France Melandri didn’t give the position to Guintoli and then in Qatar Baz did the same with Sykes. It does depend very much on the relationship between the riders in the team, Baz and Sykes had a bad relationship after Baz crashed into Sykes in Sepang. It also depends on the contract for next year, if Baz was riding for Kawasaki next year for sure he would have given the position but he is heading to MotoGP so he’s difficult to control.”

Twice MotoGP champion Jorge Lorenzo kept his thoughts a little shorter: “My opinion is that you are a rider for a factory and this factory trusts you and pays you, so they are most important. If I am ever in the situation that I have to help my team mate, for example if Valentino was fighting for the championship and not me, I would help him.”

Do you agree with them?