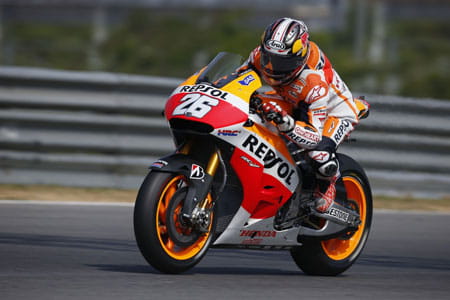 Day two of the three-day MotoGP pre-season test at Sepang has concluded, with Dani Pedrosa leading the field with a best lap of 2:00.039. The Repsol Honda veteran scored three race victories last seasondespite breaking his collarbone in Germany, and now hopes to make his ninth year in the premier class his year.

Ducati’s Cal Crutchlow was the quickest Brit with a best lap of 2:00.952, while Bradley Smith and Scott Redding posted tenth and 17th best times.

World Champion Marc Marquez, who broke his fibula last Wednesday during a flat track accident, is understandably absent from Sepang, and the recent confirmation that he will be unable to join the Phillip Island test, which takes place before the season kick-off at Qatar, will undoubtedly be a blow to the young Spaniard.

In a statement released after a check-up with his doctor yesterday afternoon, Marquez said: "I’m obviously disappointed that I’m not in Sepang at the moment and to miss Phillip Island is also unfortunate, but we believe it is the best decision. After my meeting today with Dr. Mir, although he was happy with the general situation of my leg after only seven days since the accident, he advised against taking unnecessary risk. So I will take time to rest and get myself as fit as possible to return to Qatar for the first race in the best shape possible."

In addition, the PBM team of Michael Laverty and BrocParcs were absent from the test, as well as the Iodaracingduo of Leon Camier and DaniloPetrucci.

The test concludes on Friday.