Testing times at Sepang – day one 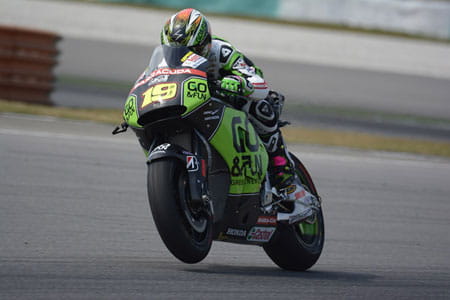 The first day of the final three-day MotoGP pre-season test at Sepang is complete, with Honda’s Alvaro Bautista topping the timesheet with a best lap of 2:00.848.

With Marc Marquez out of action following the flat track accident that resulted in him breaking his leg, the rest of the MotoGP boys were undoubtedly keen to demonstrate how far they’ve come during pre-season – just 24 days now separate them from the 2014 kick-off at Qatar.

Experienced MotoGP rider Bautista failed to make much of an impression on the premier class in 2013, but could his positive testing times be the boost he needs for 2014? The Spaniard was running fifth in the last pre-reason test at Sepang earlier this month, so his leap to the top of the timesheet today can only be positive for the Go&FunGresini team.

The second and third spots were taken by Aleix and Pol Espargaro, who are no doubt looking forward to demonstrating their brotherly rivalry to MotoGP fans when the season starts at the end of March.  The duo, who are contesting ‘Open Class’ bikes, posted seventh and ninth fastest times in the previous test at Sepang, so like Bautista before them, they’ll be keen to continue the pace in tomorrow’s leg.

The PBM team of Michael Laverty and BrocParcs were absent from the test, as well as the Iodaracingduo of Leon Camier and DaniloPetrucci.

The test continues tomorrow and Friday.