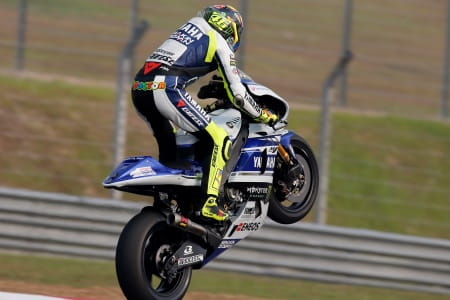 After a long winter, the MotoGP season is finally here with the first practice session in Qatar kicking off under the floodlights tomorrow. As discussed in our season preview, it seems as though 2014 could be the most exciting MotoGP season in ages and with the rules and regulations finally in place, it’s time to go racing.

In terms of past results, no particular rider holds a clear advantage: Valentino Rossi has won three MotoGP races at the Losail circuit while his Movistar Yamaha team mate Jorge Lorenzo has won two (plus three more in the 125, and 250cc categories) but historically Losail has favoured the straight-line speed of Honda (and previously Ducati).

Lorenzo took victory last year in a dominant style but Rossi stole the limelight with a late race charge from fourth to second place, including an epic duel with then rookie Marc Marquez for second place. This year, Marquez is on the back-foot for another reason – he broke his leg back in February in a dirt-track accident and has missed out on any testing since. 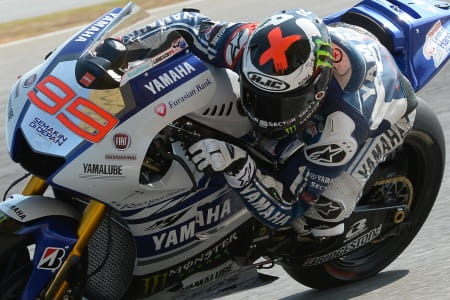 The pre-season hasn’t gone to plan for Lorenzo either, with the double World Champion at first struggling to cope with the 2014 YZR-M1’s aggressive characteristics and later struggling with Bridgestone’s 2014 tyres.

While Marquez and Lorenzo aren’t the kind of riders to let these small hiccups bother them, it shines a more favourable light on Rossi and Pedrosa ahead of Qatar. Nine-time World Champion Rossi has appeared stronger than ever in pre-season testing and following his performance at Qatar twelve months ago, he is in a good position ahead of Sunday’s race. Pedrosa, quiet as ever, set an identical time to Rossi at the second Sepang test and is heading into the season injury free so can’t be ruled out either.

With the pace of Aleix Espargaro throughout testing and improved performance from Ducati (now permitted to use open-class concessions) a few surprises cannot be ruled out, especially in qualifying with those using the softer open-class tyre. Do not be shocked to see Aleix Espargaro, Cal Crutchlow or Andrea Dovizioso starting from the front row on Saturday or even dicing towards the front for top five finishes come Sunday. 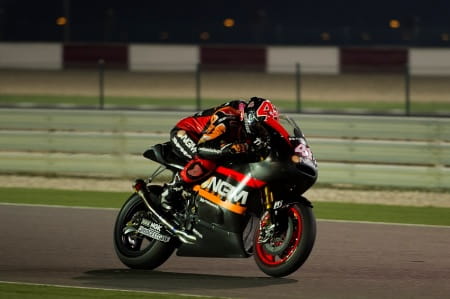 In Moto2 it’s hard to look further than Marc VDS’ line up of Esteve ‘Tito’ Rabat and Mika Kallio – dominant throughout testing the pair look to be on form ahead of the first round. Can they carry on where Scott Redding left off last year? Aspar’s Nico Terol will put up a fight, as will Takaaki Nakagami who topped the recent test in Jerez with Pons’ new signings of 2013 Moto3 front runners Maverick Vinales and Luis Salom also pushing towards the front.

KTM-powered machines have dominated Moto3 testing, with Jack Miller a clear favourite for the Red Bull Ajo team. Honda is expected to put up a strong showing with Alex Marquez and Alex Rins, but the new 250 machine struggled in testing until Jerez last week.