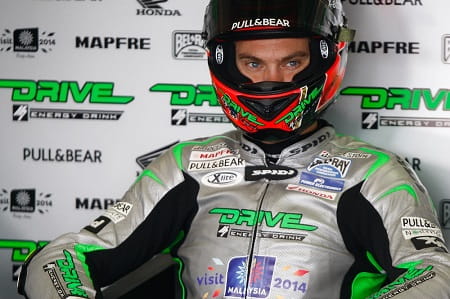 Leon Camier has admitted that his performance while replacing Nicky Hayden in the Aspar Honda squad has generated some interest from MotoGP teams for next season.

Camier was flown in at Indianapolis to replace the 2006 World Champion, who underwent surgery on a long term wrist injury during the summer break, and with the Brit improving every session heads are starting to turn.

After retiring with technical issues in Indianapolis, Camier finished his first ever Grand Prix race at Brno in the points and in the post-race test he even topped the pace of his team mate, 2009 250cc World Champion Hiroshi Aoyama.

“Riding in MotoGP has generated a bit of interest for 2015 but it’s not necessarily going to guarantee me a ride!  The key is to keep improving and see where we can go from there. This is all new for me so it’s easy to get a bit excited. We finished the test faster than Aoyama which is a good thing but in the races he’s still stronger than me. I need more time on the bike, I’ve only done one race so I can’t expect to go and beat them but getting close is good. The gap to Scott [Redding] is perhaps on another level but if I can get near Aoyama and Abraham I know I’m doing ok!” 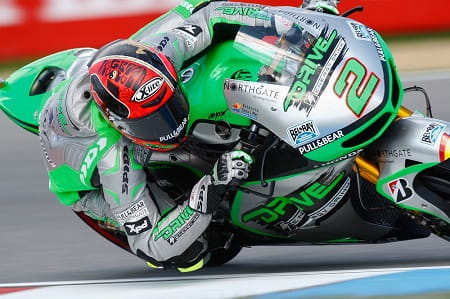 With a history in superbike, Indianapolis was  the British Superbike Champion’s first real experience on a MotoGP bike bar a quick spin on Dani Pedrosa’s Honda after winning the British Supersport Championship in 2006.

“When I got on the bike for the first time I couldn’t believe how small it was, it’s the smallest bike I’ve ever sat on! But it was Nicky’s bike and the foot pegs and handlebars were in his position, as soon as we got it suited for me it wasn’t as bad and after a while I started to feel pretty comfortable.

“In Brno, I felt it was my bike and now the hard thing is to get the settings to do exactly what I want. I need to see how far the tyres can go and keep pushing the boundaries. If you push too hard and go crazy you don’t understand so at the minute we’re just taking things one step at a time to keep taking the bike to the next level and then the level after that. I understand it more every time I go out on it.”

Camier’s progress in MotoGP may be halted by the return of Nicky Hayden, who is looking to be back on the RCV1000R as soon as Misano.

“How long I’ll be on the bike all depends on Nicky, he’s going to try and come back in Misano but if not it’ll be Aragon. He’s having weekly checks and will make the decision at the last possible minute. We don’t have any plans for the rest of the season, there are a couple of options but at the minute my focus is here.”