Marc Marquez continued his perfect run in Indianapolis at the tenth round of the 2014 MotoGP season, holding off an early charge from the Movistar Yamaha riders to take his tenth consecutive race victory.

Andrea Dovizioso took the holeshot from the middle of the front row with Valentino Rossi latching on to the Ducati's rear end ahead of Iannone and the Repsol Honda duo of Marc Marquez and Dani Pedrosa.

Rossi followed Dovizioso closely for the first two laps before making his move into lap three. Not giving up, Dovizioso pushed Rossi hard to re-take the lead at turn one three laps later. Rossi came straight back at his compatriot but the pair touched into the third turn allowing Marc Marquez and Jorge Lorenzo through onto the straight.

A small mistake from Marquez saw Rossi re-take the lead as Jorge Lorenzo battled with Dovizioso for third.

Lorenzo took second from Marquez into the eleventh lap before a harsh pass on Rossi pushed the Italian wide allowing Marquez to take the lead for the second time. Sensing his opportunity the Spaniard looked to pull a gap on the chasing Yamahas, stretching out almost a seconds lead in just one lap. 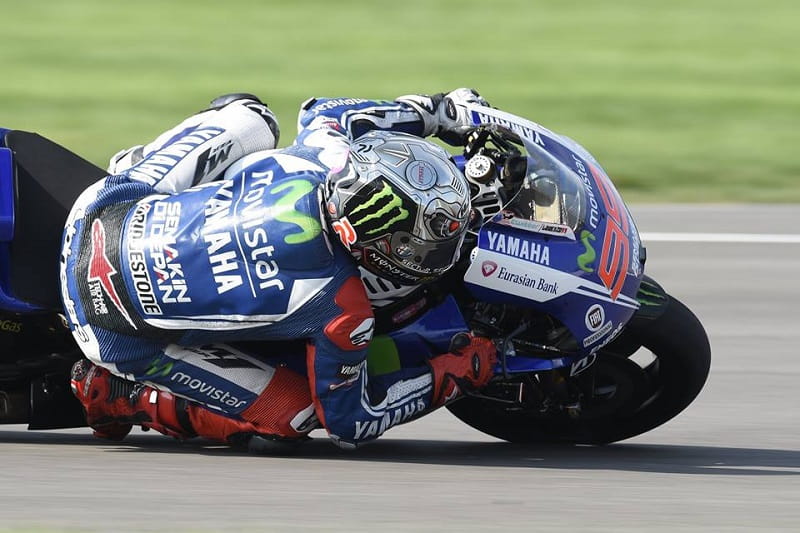 Stefan Bradl crashed out with fifteen laps to go after hitting the back of Aleix Espargaro, ending a miserable weekend for the German who recently announced he'd be leaving the LCR Honda squad for Espargaro's NGM Yamaha seat.

A move at turn two on the sixteenth lap saw Lorenzo finally secure a pass on Rossi but with Marquez the fastest man on track, his chances of achieving higher than second place looked limited. Pol Espargaro and Bradley Smith passed Andrea Dovizioso in the closing stages but Smith struggled to keep up with his younger team mate in the final few laps.

Marquez’ victory marks his tenth consecutive win this year. Jorge Lorenzo's second place was just his second this season with Rossi closing in on Pedrosa in the championship with third. After the impressive start, Andrea Dovizioso could only manage a seventh placed finish ahead of team mate, Cal Crutchlow who got the better of fellow Brit, Scott Redding who finished top open class bike for the first time. Hiroshi Aoyama rounded out the top ten.