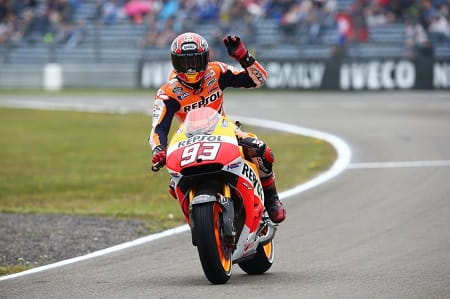 Marc Marquez has taken his eighth consecutive MotoGP victory in a dramatic flag-to-flag encounter in Assen. Ducati’s Andrea Dovizioso bagged a strong second place ahead of the second Repsol Honda of Dani Pedrosa in third.

As the riders headed out for their sighting lap, the rain began to fall leaving riders in the predicament of sitting on the grid on bikes set up for dry conditions on a wet track. Organisers delayed the start allowing riders back into the pits to switch to their second bikes, hopefully set up for wet conditions before two further sighting laps to assess conditions.

As the rain had stopped by the time it came to reforming the grid, a couple of riders thought it wise to take the risk of starting on slicks, including man Valentino Rossi and Pol Espargaro. However it began to rain again as the riders set off on the warm-up lap, leading Rossi and Espargaro to head into the pits to start from pit lane on their wet-setup machines.

Marc Marquez took the holeshot from the front row of the grid, ahead of Ducati’s Andrea Dovizioso and Dani Pedrosa. Pedrosa fell backwards as Aleix Espargaro settled into third position. Dovizioso looked for the lead underneath Marc Marquez but it didn’t last long as the rain started to come down at the back of the circuit once again.

The riders were soon faced with a dilemma; half of the circuit was wet as the rest dried out. It was an inevitability that they would eventually have to head into the pits to change over to dry tyres. Scott Redding was first to come into the pits, his rear tyre destroyed on lap six. It wasn’t long after that the race leaders Marc Marquez and Andrea Dovizoso headed in to switch to their dry bikes too, followed by Dani Pedrosa and Aleix Espargaro. It might have been too early for Marc Marquez though, as he ended up on the gravel on his first lap on slick tyres. 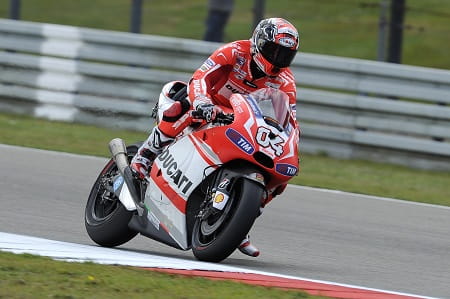 Jorge Lorenzo pitted with nineteen laps to go, seeing the original order re-instated but this time with Dovizioso in the lead by almost four seconds after Marquez’ grass tracking. Aleix Espargaro was third once again ahead of Dani Pedrosa and Alvaro Bautista. Cal Crutchlow was enjoying a much better race on his Desmosedici in the wet in sixth ahead of a heroic performance from Broc Parkes in seventh place on the PBM Aprilia after starting on slick tyres. Iannone sat in eighth ahead of  Rossi in 9th, some twenty four seconds behind the leader with sixteen laps to go. Movistar Yamaha’s Jorge Lorenzo was struggling down in seventeenth position with thirteen to go, lapping some six seconds off the pace of the leaders.

Fastest man on track, Rossi began to make progress through the battle for fifth, taking Cal Crutchlow for sixth with twelve to go to begin an attempt to pass the Ducati of Andrea Iannone. It didn’t take him long as he charged into fifth position just a lap afterwards but the gap to fourth was too much for the Italian.

Meanwhile, Dani Pedrosa and Aleix Espargaro were scrapping for third place as Marc Marquez reeled in Ducati’s Dovizioso, taking the lead from the Italian on lap sixteen. Cal Crutchlow was slipping backwards on the Ducati as Tech 3’s Bradley Smith passed him for eighth on the twentieth lap, with Broc Parkes behind the pair in tenth.

Marquez eventually crossed the line with a lead of over five seconds ahead of Andrea Dovizioso and Dani Pedrosa. Rossi, kicking himself for changing his mind about starting on slicks, crossed the line in fifth ahead of Iannone, Bautista and Bradley Smith with Crutchlow and Bradl rounding out the top ten. Broc Parkes completed his heroic ride to a season-best eleventh place ahead of top-production Honda, Bike-Social-backed Scott Redding.

Anthony West took his first victory in eleven years in a slowly drying Moto2 race. There had been quite a bit for the Brits to cheer about as Sam Lowes chased Simone Corsi in the early stages, but both riders fell at different points to hand the lead to West who was joined on the podium by Maverick Vinales and Mika Kallio. Alex Marquez took victory in the Moto3 race ahead of Alex Rins and Miguel Oliveria.