Miller: 'The brakes want to tear the bike from underneath you' 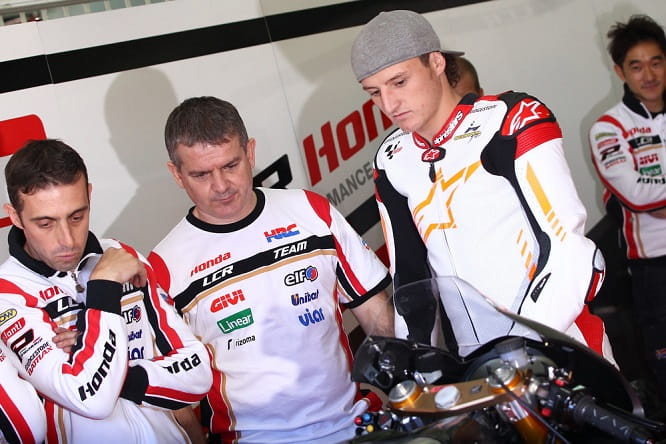 2014 Moto3 runner-up Jack Miller was buzzing this afternoon after sampling his 230bhp MotoGP bike for the first time in Valencia.

Jumping from a 60bhp KTM Moto3 machine to a 230bhp production Honda, Miller faces a huge learning curve but that didn’t stop him from being one of the first riders to leave his box as pit lane opened at 12pm Monday afternoon.

“The speed was a shock at first but after two or three exits you get used to it” said the Aussie. “Nothing can prepare you enough for the brakes though, it’s an incredible feeling, all they want to do is tear the bike from underneath you. It’s an amazing bike to ride and I’ve had the best day of my life.

“It’s so difficult to describe the feeling of going from 60bhp to 230bhp or whatever we have now. The speed was one thing to overcome but we now need to perfect the braking and the lines etc. I’d never ridden a 600 or anything, the Moto3 was the biggest bike I’d ridden until today. It was a little more difficult to change direction and everything is a little slower in that respect but the thing is awesome to ride. It’s a special bike.” 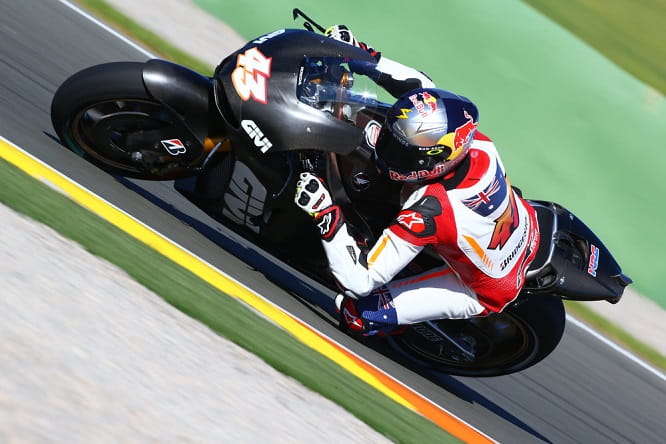 Because the jump in machinery was so huge for Miller, the LCR team made him run without electronic aids in order for him to learn the connection between wrist and throttle and get used to the natural feel of the bike.

“I didn’t ride with traction control or wheelie control today. They want me to learn to ride the bike without having the electronics first” he explained.  “It’s so hard to describe, it’s out of this world how quick the bike accelerates, with no wheelie control you’re coming out of a corner burying the rear brake trying to keep the front down and you click fourth gear, it does a little wheelie and then you tuck in but as soon as you hit fifth gear it starts wheeling again! I understand why they’ve made me ride with no electronics and for me it’s been great to learn the connection between my wrist and the rear tyre.”

Miller may lack MotoGP experience but his crew certainly don’t; his team of engineers is headed up by former Casey Stoner Crew Chief Cristian Gabbarini.

“Cristian is a really good guy,” Miller continued. “We seemed to get along from the word go. He’s really calm and on such a high pressure day like today he kept me calm too. There’s no pressure from him at all. It’s been a great day and I look forward to the next two days.”

After the first day of testing in Valencia, Miller sat 22nd on the time sheets with a fastest lap of 1’34.6.