Melandri: ‘The biggest difference is the tyres’ 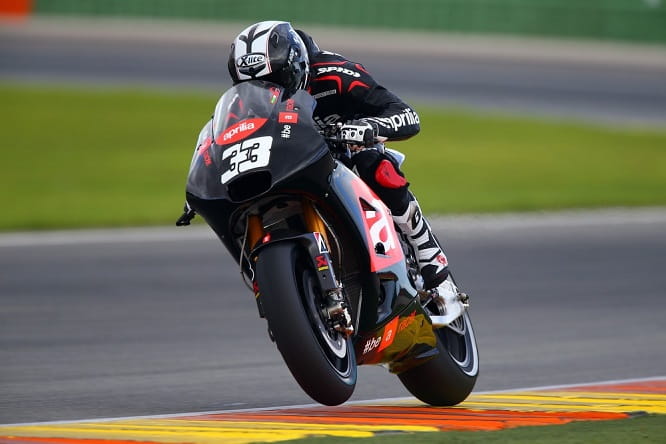 Aprilia made its long awaited return to MotoGP this week, rolling out the new ART machine with Marco Melandri and Alvaro Bautista in Valencia.

Test rider Alex Hofmann circulated on the bike, which is loosely based on the RSV4 superbike, for most of Monday before the factory’s two new signings got their first taste of the machine. Eager to make the most of their testing time, both riders ventured out in the wet on Tuesday.

So far things aren’t looking good for the Italian marque with the bike massively lacking top speed. Down the half mile straight the ART is some 12mph down on its competitors.

Marco Melandri was confirmed on Monday as the Noale manufacturer’s second rider for 2015. Having spent the last season riding the RSV4 in the World Superbike Championship, he says the difference between his previous and new bikes isn’t all that much.

“The tyre makes a bigger difference than the chassis,” Melandri explained. “The chassis is a little different but not too much at the moment. The tyre gives you a much different feeling, it’s stiffer in both the dry and the wet. It will take some time for me to get used to it.

“At the moment the fuel tank is a modified Superbike tank but we’re getting a smaller one at some point. The chassis is a little smaller than the RSV4 but the engine and base is from the superbike so we cannot make it smaller. The new engine will be smaller but that won’t be here until 2016.

“Our electronics are very similar to the superbike at the moment, in Superbike I don’t think the level of electronics are too bad because it is free so we can do whatever we want. Next year we will have Magnetti Marelli with Aprilia software. I think we’ve started out well, we have to make some improvements but we already have some idea of how to do it.

“I am confident. We don’t know our potential yet, I hope in the dry we can get some good track time in to understand. We know we are late, that’s for sure, but you never know.”