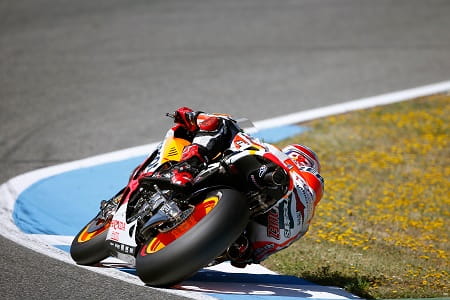 What’s the best thing to do after decimating your opposition throughout the weekend at Jerez? Jump straight back on your Honda RC213V and beat them again in fifty-five laps testing of course! That’s exactly what Marc Marquez did yesterday topping the timesheets at the Jerez post-race MotoGP test, this time just two tenths faster than Yamaha’s Jorge Lorenzo.

Marquez spent the day evaluating aspects of the bike that the team don’t get chance to during Grand Prix weekends, such as electronics, start strategy and trying out different set ups. The Spaniard did try a different rear suspension setting but went back to what he had already been using in the end on the ‘don’t fix what isn’t broken’ premise.

After a stunning ride to second on Sunday, Valentino Rossi was third on the timesheets just hundredths behind his Movistar Yamaha team mate with Dani Pedrosa setting the fourth fastest time a further four tenths back. Alvaro Bautista’s progress continued as the Go&Fun Honda rider setting the fifth fastest time ahead of the second satellite Honda of Stefan Bradl.

Pol Espargaro was seventh ahead of his brother Aleix and team mate Bradley Smith with Hiroshi Aoyama rounding out the top ten as the top production Honda. Bennetts-backed Scott Redding was twelfth, setting a time two tenths faster than he had in qualifying.

Moto2 rider Simone Corsi was given a first taste of MotoGP as he tested Colin Edwards’ Forward Yamaha, although contrary to rumours Corsi will not be stepping up to the MotoGP paddock in place of Edwards any time soon as the American isn’t planning on an early retirement.