Marquez signs off 2014 with record victory 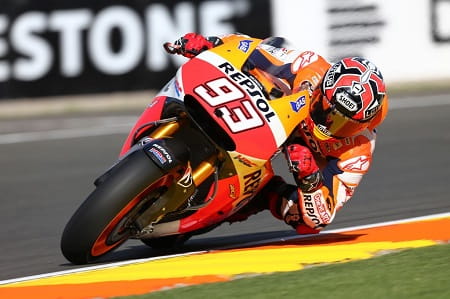 Marc Marquez signed the 2014 season off in style this afternoon in Valencia taking a record-breaking 13th victory ahead of Valentino Rossi and Dani Pedrosa.

There were drops of rain as the race got underway with Andrea Iannone taking the holeshot ahead of good friend Valentino Rossi but World Champion Marc Marquez made a strong start from the second row of the grid.

Jorge Lorenzo got pushed back by the factory Ducati riders scrapping with one another for fifth place on the second lap. After securing a way around Dovizioso, Crutchlow passed Dani Pedrosa to take fourth place, right on the back of Marquez.

Powering on, Iannone built a 1.6 second lead ahead of compatriot Rossi who in turn led Marquez by another second. Dovizioso re-took Crutchlow on the fifth lap with Movistar Yamaha’s Jorge Lorenzo passing the Brit a lap later.

As the rain eased off, Marquez reeled in the race leaders and made a move on Valentino Rossi on lap nine before taking the lead from Iannone. The Italian tried his best to fight back, but Marquez was having none of it.

With Marquez pulling a gap at the front, Rossi began to look for a way round the Ducati, succeeding with a clean pass at turn 11. After leading for ten laps, Iannone dropped out of contention for the podium as Pedrosa slipped into third. 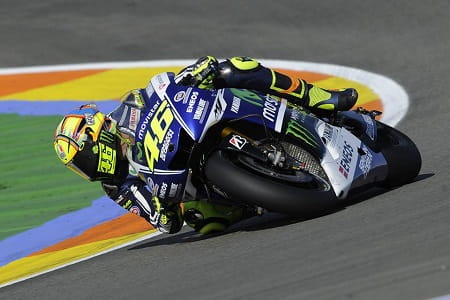 Suzuki’s MotoGP return ended early as Randy de Puniet retired to the pits with a technical issue on lap 12.

Lorenzo moved into fourth place at half distance, some five seconds behind Marquez’ lead. Iannone found himself in the gravel on the thirteenth lap, re-joining behind Dovizioso and Crutchlow in eighth.

Marquez looked over his shoulder as rain started to fall with 12 laps remaining. Having gone wide and lost positions, Lorenzo gambled and entered the pits to switch to his wet bike along with Andrea Iannone. The rain closed things up at the front, with Rossi just one second behind Marquez.

Lorenzo retired from the race on lap 25 with his gamble having not paid off. At the front, Marquez had regained composure and pulled a gap of three seconds over second placed Rossi.

Meanwhile, a battle was underway between Ducati team mates and old sparring partners Crutchlow and Dovizioso. Crutchlow slipped past the Italian with three laps to go but Dovizioso immediately fought back.

On the last lap Marquez’ gap was 5 seconds over Rossi leaving him to cross the line to take a record 13th victory this season. Pedrosa finished third ahead of Andrea Dovizioso, who got the better of Crutchlow in the closing stages by just 0.06. The Tech 3 Yamaha of Pol Espargaro popped his elder brother Alex to sixth place with Bradl, Pirro and Redding rounding out the top ten.

Lorenzo’s retirement saw Rossi comfortably clinch second in the championship, his highest ranking since winning the title in 2009.