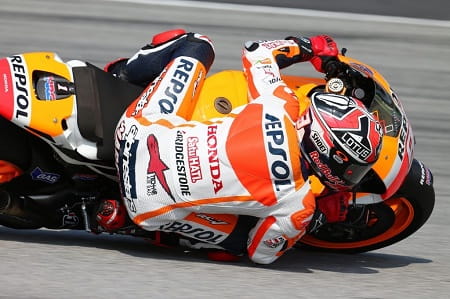 Marc Marquez has equaled Mick Doohan’s record of 12 race wins in a single season after storming to victory in the heat and humidity of Malaysia. Valentino Rossi chased the Spaniard for most of the race before dropping off in the final stages with Jorge Lorenzo finishing third.

Dani Pedrosa took the holeshot as Lorenzo and Marquez came together at the first corner with the latter re-joining the race in eighth position. The World Champion didn’t waste his time in fighting through the pack, moving into fourth position on the third lap to begin chasing down the leaders.

Pedrosa tucked the front at the final corner on the third lap promoting Marquez to third behind Lorenzo and Rossi. It would be two DNF’s in a row for Britain’s Cal Crutchlow, who retired from a strong sixth position in the early stages.

After several laps of a tight-knit train at the front, Rossi took the lead from his team mate to rapturous cheers from the Malaysian crowd. With a rapid Rossi at the front, Marquez had no choice but to barge past Lorenzo into the eleventh lap to chase down the Italian, who he passed to take the lead just a lap later. 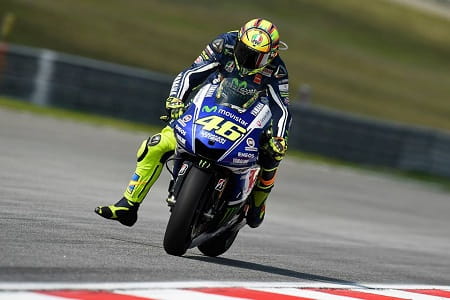 Pedrosa had made a strong recovery after re-joining the race, he moved into eleventh before crashing out for a second time.

The leading trio became a leading duo when Lorenzo dropped off the back of his team mate and Marquez’ Repsol Honda at the front, it had looked as though Rossi would stick with Marquez all the way but the Italian also slipped off the pace in the final four laps.

Britain’s Bradley Smith made a valiant effort to pass Stefan Bradl for fourth in the final corner but lost out as he ran wide. The Oxfordshire lad’s team mate, Pol Espargaro took a heroic sixth place after crashing out and breaking his foot on Saturday.

Yonny Hernandez finished seventh ahead of Andrea Dovizioso, who had run as high as fourth in the first ten laps, and Hector Barbera. Bike Social-backed Scott Redding rounded out the top ten.

Rossi’s second place puts him a strong position for second in the championship, now twelve points ahead of team mate Jorge Lorenzo. Dani Pedrosa’s DNF has ruled him out of contention for the runner-up spot.