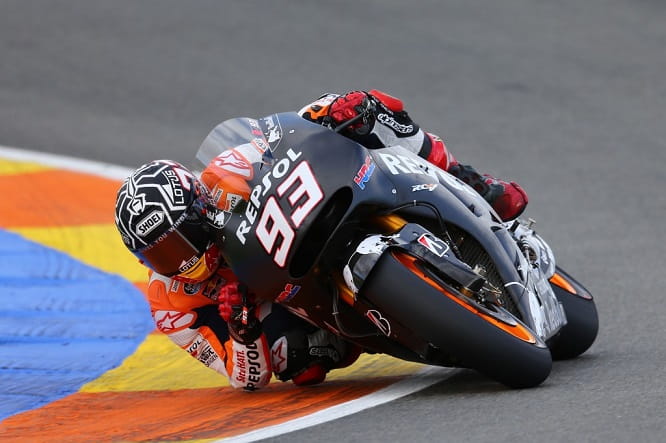 Marc Marquez ended 2014’s MotoGP track action with the fastest time in the three day test at the Ricardo Tormo Circuit in Valencia. Marquez was the only rider to dip under the 1.31 barrier with a fastest lap of 1’30.973.

Dani Pedrosa was second, despite not being happy with the 2015 RC213V, and Jorge Lorenzo third. Pol Espargaro outpaced the factory-mounted Valentino Rossi with Bradley Smith rounding out the top six.

Danilo Petrucci impressed on his Ducati debut setting the seventh fastest time ahead of Britain’s Cal Crutchlow, still getting used to the LCR Honda eighth fastest.

Aleix Espargaro impressed setting a 1’32 lap on the Suzuki GSX-RR, just 1 second off Marquez’ pace. Scott Redding’s fastest lap put him in 14th place as he familiarises himself with factory Honda power.

Alvaro Bautista put in a strong time on the Aprilia, setting the sixteenth fastest time less than two seconds off the pace. The leading fastest rookie was Maverick Vinales who placed 18th fastest with a time of 1’33.2, just a second off his team mate Espargaro.