MarcVDS boss Michael Bartholemy, part 2: “If Ducati decide to go to the open class then I think it is realistic that Redding can beat Crutchlow”

Michael Bartholemy is the MarcVDS Moto2 Team Manager and Scott Redding’s personal manager.  Following the first part of our interview, today we hear Michael’s thoughts on Ducati exploring the possibility of an open class switch as well as Scott’s realistic competition in 2014. 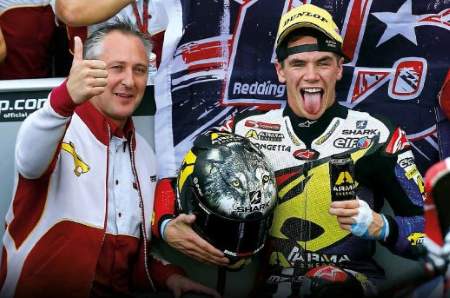 The Factory Ducati rider, Andrea Dovizioso has recently mentioned the possibility for the team to run in the Open Class (previously known as CRT where the number of engines is unlimited, fuel tanks are larger but compromises are made with the ECU), a story which was refuted by Ducati.  But ahead of the proposed rule changes set for 2017 (major regulation changes are expected to include a spec-ECU with datalogger and a rev limiter), is it actually such a surprising idea?

I’ve heard this (rumour) many times that it’s something they’re looking into but I guess it’s all about preparing for 2017 – there are two years of information gathering until this happens which everybody will have to go through.

I don’t know how Ducati would handle this with their two riders, what if somebody said to Crutchlow, “you don’t have a factory bike, you’re going to the Open Class” – I wouldn’t think he would be happy with this decision because we know that when you are in the Open Class you are not there to win the race, you will not fight with the big guys at the front. If you’re on a factory bike you want to be fighting with the likes of Marquez or Lorenzo. On the other hand, if you look at Ducati’s situation, maybe it’s not so bad, maybe if they say that they aren’t competitive at the moment so let’s loose a year or two years to be competitive when the new regulations change.

On Redding being the top Brit in 2014

The 2014 MotoGP season will see four other British riders lining up on the grid alongside Scott Redding; Cal Crutchlow, Bradley Smith, Michael Laverty and the recently confirmed Leon Camier.  But will the 21-year old Gloucestershire man be the top Brit in his rookie season?

In 2014 I don’t think it’s possible, there’s too much difference in the equipment.  Although we’ll have to see with Crutchlow, if Ducati decide to go to the open class then I think it is realistic that Scott can beat Crutchlow.

This is normal, you cannot compare a Factory bike with an Open Class bike; they are four times the cost so there are going to be some obvious differences but you need guys like Scott, Nicky Hayden, Aleix Espargaro to develop them for 2017 when everybody will jump on them. 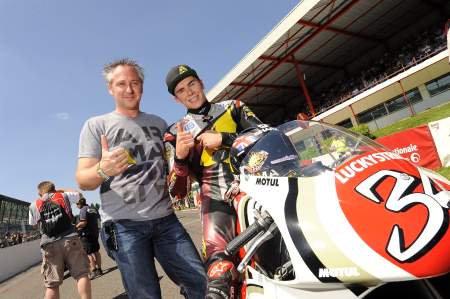 Scott Redding has come up through the World Championship ranks having raced in the 125cc class aged just 15 but more recently he’s seen competitors from his time in Moto2 make the step up to MotoGP.  Now he’ll be back racing against his old foes once again but what are his chances?

Bradl, Iannone and so on – these people cannot reach Scott’s ability level but in 2014 they will be on better equipment and this is something we knew when we signed the contract.  It will be difficult to beat these guys but looking at the results of Iannone I think it actually could be possible.  Look at Espargaro’s results on the Aprilia too…and we know that the Honda is a better bike.

On his Moto3 machine

The MarcVDS team entered a young Belgian by the name of Livio Loi on a Kalex KTM in the Moto3 Championship last season but he struggled and finished in 22nd position overall. Being under 16 at the beginning of the season, Loi was forced to miss the first two rounds but was it a short-lived experiment or are the team sticking by the 16-year old?

Yes, he is running for us again.  It was a hard year, 2013, I think it was a learning year but in the end you learn things all the time, I’m going into my 23rd year and I’m still learning!  It was quite hard and a stress at times, we’ve learnt from each other, we know each other better now.  We’ve had a winter training plan for him and we expect to see his potential during 2014. 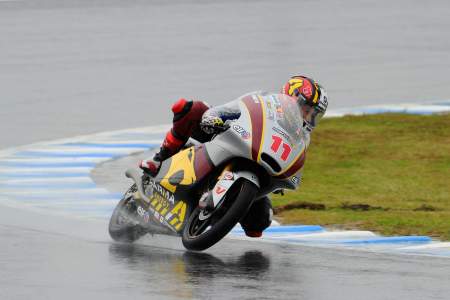 By running a Moto2 Team, a Moto3 bike and GP’s Scott Redding, Bartholemy certainly has his hands full but during the off-season, does he relax?

I work at least some hours every day but I also have a family life.  The biggest thing is to have some weekends with them because during the season I’m away so much so I do miss them.  When they are at school I can do my work but I switch off from Friday afternoon for the weekends.

Do you agree with Michael's comments?  or !