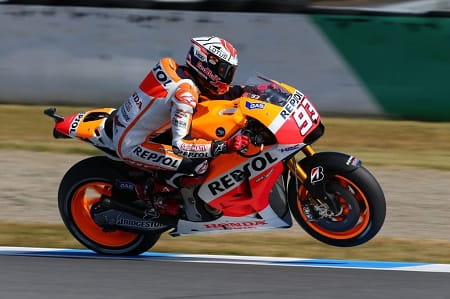 Rossi took the holeshot ahead of pole-man Andrea Dovizioso and Jorge Lorenzo, who after taking his first win of the season last time out in Aragon looked to have re-found his form. Marquez made things difficult for himself in the early laps languishing down in seventh place at one point on the first lap. Taking no risks, the Spaniard fought through slowly, progressing through into sixth and then fifth positions.

After jumping the start, Cal Crutchlow crashed out on the second lap.

Marquez moved into fourth on lap three, displacing Andrea Iannone as at the front Jorge Lorenzo took the lead from his team mate. 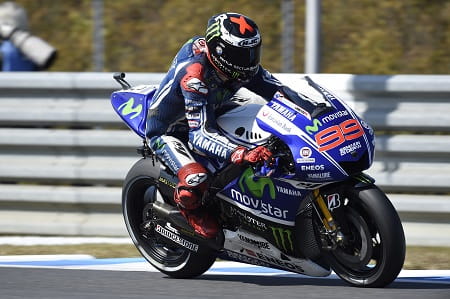 Marquez’ progression continued as he passed the Ducati of Dovizioso for fourth on lap eight to chase down Valentino Rossi with Lorenzo pulling a gap at the front. Having made it through the pack slower than his team mate, Dani Pedrosa took fourth from Dovizioso.

On lap 13, Marquez made his move on Rossi but the Italian veteran fought hard to stay ahead of the Spaniard. One lap later, Marquez secured his move and the 2014 championship as he cruised home to second place.

Lorenzo won the race by 1.6 seconds from Marquez and Rossi with Pedrosa and Dovizioso completing the top five. Iannone finished sixth ahead of Stefan Bradl with the Tech 3 duo of Pol Espargaro and Bradley Smith eighth and ninth respectively. Alvaro Bautista was tenth ahead of top open bike Aleix Espargaro, Scott Redding finished sixteenth.

Marc Marquez now holds an unassailable 75 point lead over his rivals to take his fourth world title in five years. The battle for second place is far from over though, Rossi’s second place sees him move into the runner-up spot on equal points with Dani Pedrosa but after two victories on the bounce, Lorenzo now sits just three points behind the pair.