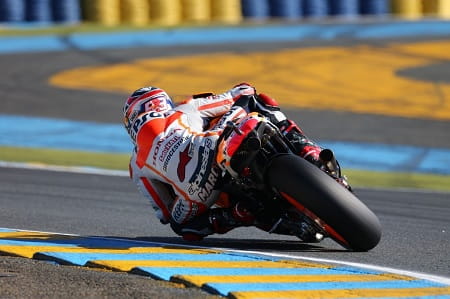 Marc Marquez has become the first rider since Giacomo Agostini to take victory in the first five races of a Grand Prix season. The Spaniard crossed the line 1.4 seconds ahead of Yamaha’s Valentino Rossi to take his fifth victory in succession.

Despite a strong start, Marquez was battered backwards in the first few turns and ran off track after clipping the back wheel of an off-trajectory Jorge Lorenzo. The pair settled back into the pack in tenth and eighth respectively, with Dani Pedrosa sandwiched between them after an uncharacteristically shocking start for the second Repsol Honda.

At the front it was Dovizioso leading from Stefan Bradl and Pol Espargaro, but it wasn’t long before Movistar Yamaha’s Valentino Rossi was charging through the pack sensing his chance with Marquez being held up in tenth. Passing Espargaro and Bradl easily, he faced a tough task getting past the man who replaced him at Ducati as Dovizioso made his Desmosedici as wide as possible. Rossi secured the lead on lap six but Dovizioso, Bradl and Esparagaro didn’t look like letting the Italian go. 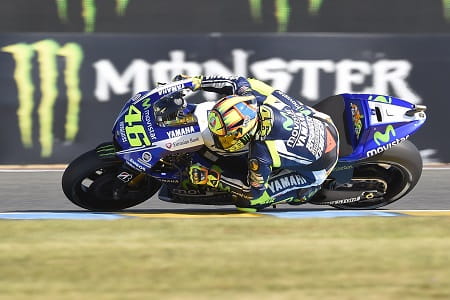 By lap five, Marc Marquez had followed Jorge Lorenzo through the pack to sixth place as Valentino Rossi pulled a lead of 0.5 seconds over Monster Tech 3 Yamaha man, Pol Espargaro. Marquez ran off track again on lap six, pushing hard to make up ground, but didn’t lose much time and passed Jorge Lorenzo for fifth in the next few corners.

Lapping half a second quicker than anybody else on track, it was inevitable Marquez would make his way to the front and within two laps the Spaniard had passed Dovizioso, Bradl and Espargaro to begin his attack on the Doctor. It didn’t take him long to catch the leading Yamaha and he slipped past on lap 13 as Rossi went wide. This mistake saw off any chance of Rossi fighting back and Marquez pulled a comfortable gap of around two seconds over the Yamaha man, which he maintained to the end of the race.

Passing Pol Espargaro on lap 18, Alvaro Bautista took a strong third place after a tough start to the season. Espargaro’s fourth place marks a career best result for the rookie. Things weren’t quite so sweet for Jorge Lorenzo however, the Spaniard was passed by injured compatriot Dani Pedrosa in the closing stages to lose out on fifth place. Pedrosa had struggled throughout the race after struggling with his arm, which was recently operated on to treat arm pump. 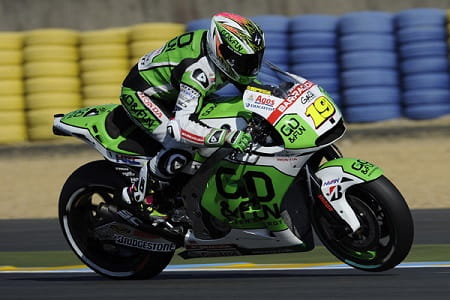 Stefan Bradl crossed the line seventh ahead of Dovizioso and Aleix Espargaro with Bradley Smith disappointingly rounding out the top ten ahead of Ducati’s Cal Crutchlow. Bike Social ambassador Scott Redding crossed the line top production Honda ahead of Yonny Hernandez and Hiroshi Aoyama. Nicky Hayden fell from his Drive M7 Aspar Honda on the first lap following an incident with Andrea Iannone.

In Moto2, Finnish rider Mika Kallio took his second win on the bounce ahead of Simone Corsi and Esteve Rabat while in Moto3, Jack Miller took victory after an incredible last lap. The Australian barged an incredibly unhappy Efren Vazquez out of the way to cross the line ahead of Alex Rins and Isaac Vinales.