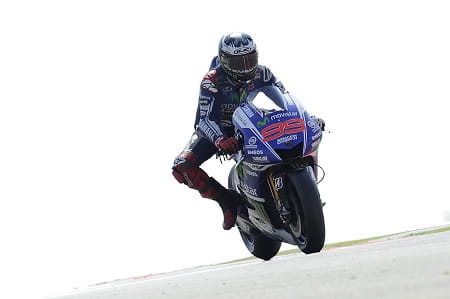 Jorge Lorenzo bagged his first victory of the season this afternoon at Motorland Aragon as tricky conditions caught out Marc Marquez, Dani Pedrosa and Valentino Rossi.

Overnight rainfall saw the MotoGP paddock wake to a wet and misty Motorland Aragon circuit with delays to morning warm-up proceedings due to low visibility. After all three classes had laid their rubber on the asphalt, the circuit had largely dried but the cool temperatures meant periphery remained damp.

Andrea Iannone launched off the first row of the grid to lead into the tight first corner ahead of Dani Pedrosa, Marc Marquez and Jorge Lorenzo. Iannone maintained his lead for the first lap but lost out on lap two as the rear of his Ducati stepped out after hitting a damp patch and despite a valiant effort to stay upright on the wet grass for 100 metres, he crashed to the floor.

The tricky conditions took their second victim two laps later, this time in the form of Misano race victor Valentino Rossi. Running in too hot at the top of Aragon’s ‘corkscrew’ section, Rossi ran off the track losing his Yamaha YZR-M1 on the soggy astroturf taking quite the battering on his way down. 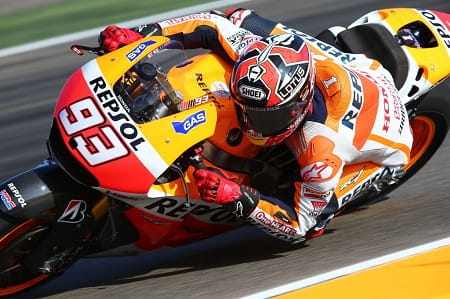 Having passed Pedrosa a lap previous, Jorge Lorenzo took the lead from championship leader Marc Marquez on the ninth lap, remaining close to his fellow Spaniard, Marquez re-took the lead two laps later. With rain in the air, race direction opened pit-lane for bike swaps but with precipitation only light at this stage, the 22 MotoGP riders remained on track.

Lap times slowed with the threat of rain and it was Lorenzo who took advantage of the slower pace slipping into the lead at the end of the back straight. Marquez was straight back at the Yamaha man once he’d composed himself in the new conditions, with Pedrosa also slipping under Lorenzo on lap 18.

Prior to the weekend Marquez had said he’d be thinking about the championship but when Pedrosa passed his team mate for the lead, the young Spaniard fought back hard with the pair swapping positions almost every corner in worsening conditions. As the rain started to fall more heavily, Pedrosa secured the lead.

Riders in the mid-pack poured into the pits but a determined Repsol Honda duo continued to battle with Lorenzo dropping off. Andrea Dovizioso was the first to be caught out, slipping off his Ducati out of fourth position. Lorenzo pitted for his wet set-up M1 with four to go but having pushed it this far, Marquez and Pedrosa had opted to battle it out to the end.

With the rain falling, the duo tip toed around the Aragon circuit on their slick tyres but it wasn’t enough, as soon as the tyres had cooled down in the colder temperatures both riders were flicked from their machines, first Pedrosa and then Marquez. Both managed to remount and get back to the pits for their spare machine. 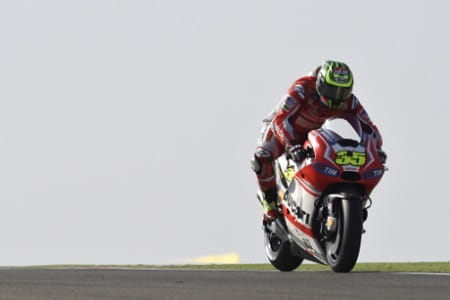 This left Lorenzo, whose calculated strategy had left him with a comfortable gap out front, to bring his Yamaha home taking victory for the first time this season. Cleverly timed pit strategies from Aleix Espargaro and Cal Crutchlow saw the pair complete the podium, crossing the line fighting for second place with elbows out.

Marquez managed to get away with his crash, finishing in 13th place and one point ahead of Dani Pedrosa meaning he heads to Motegi with the 75 points needed to clinch the title should he finish ahead of his team mate.