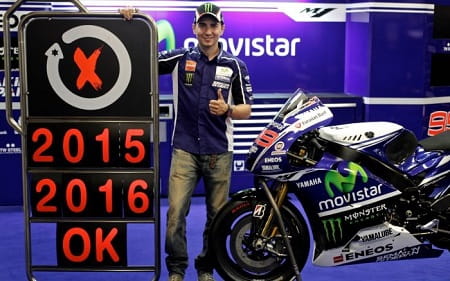 Jorge Lorenzo will remain with Yamaha in MotoGP for the 2015 and 2016 seasons. The Spaniard is the last of the factory riders to put pen to paper in a move that sees Movistar Yamaha with an unchanged line-up for the next two years.

Questions over Lorenzo’s Yamaha future had arisen at the start of the season after it became apparent 2014 would be a difficult year for the Spaniard. Would he want to challenge Marc Marquez on equal machinery next season? Reports suggest Lorenzo put off signing for Yamaha earlier in the year to assess his options but with no offers from Honda forthcoming the Spaniard had little choice but to re-sign.

After a dismal campaign so far in 2014, standing on the podium just twice, Lorenzo will be hoping for a more competitive package from Yamaha next year. Recent rumours discussed not whether he’d sign with the Movistar-backed outfit, but rather how long for with reports suggesting he’d be keen to leave Yamaha at the end of 2015 should no improvements be seen. It is unclear whether there’s a clause in the contract that would allow Lorenzo to leave at this point.

Should he see out the full two years, he’ll have spent a total of nine Grand Prix seasons with the Japanese factory.

“I am very happy to finally be able to make this announcement” said Lorenzo. It is a relief to be able to now completely focus on the remainder of the 2014 season in the knowledge that our relationship will continue for the next two seasons. It has always been my wish to continue my career with Yamaha; I strongly believe we can fight for a third title together. This season has been very challenging after a difficult start, however we will continue to take it race by race, giving 100% until Valencia. I want to thank Yamaha for their continued belief in me and all the Yamaha fans around the world who continue to support me. After the summer break I’m excited to be back at Indy with my team and focused again on riding.”