Lorenzo on top as tyre testing begins in Phillip Island 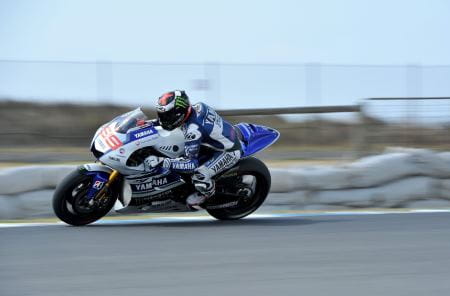 Jorge Lorenzo topped the timesheets on Day 1 of tyre testing at Phillip Island from Ducati’s Cal Crutchlow, although lap times are not the focus of this three day test. Riders from all three MotoGP factories (Yamaha, Honda and Ducati) are present at Phillip Island for the test, after issues with tyres at the 2013 race saw compulsory pit stops introduced to the race.

Lorenzo, Rossi, Pedrosa, Crutchlow and Dovizioso are joined by Moto2 riders Tito Rabat and Mika Kallio from the Marc VDS team and Jordi Torres and Nico Terol from the Aspar squad who are testing tyres for Dunlop.

With Bridgestone setting a busy schedule for the MotoGP riders, Monday’s tasks were to focus on set-up with control tyres and then to perform run short runs on a selection of six different new tyres. Some of the new tyres tested include completely new compounds from Bridgestone, where others consist of previously used compounds with a new construction. The aim is for riders to identify the optimal tyres at some point tomorrow before going on to test the selections during longer runs.

Criticising Bridgestone’s 2014 offering after a tough time in Sepang, Lorenzo will be pleased to top the timesheets while Cal Crutchlow will also be happy to be just 0.3 from the Spaniard on the open-specification Ducati. Valentino Rossi was 0.7 off Lorenzo ahead of Pedrosa and Dovizioso. World Champion, Marc Marquez is missing from the test after breaking his leg in a flat-track accident two weeks ago.

The Moto2 riders were on track at the same time as the MotoGP bikes, with rear-lights being used on Moto2 bikes to warn the faster MotoGP bikes when approaching the slower 600cc machines.

Esteve Rabat set the fastest time from Nico Terol. Mika Kallio put in sixty two laps before high-siding at Siberia corner resulting in a trip to hospital for the Finnish rider with fears of a wrist injury. Luckily he was given the all clear and will continue testing tomorrow.