Lorenzo confident of taking challenge to Marquez in Catalunya 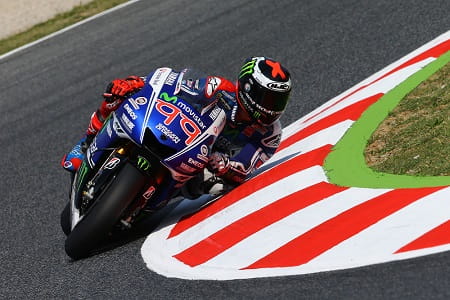 Jorge Lorenzo is confident he can take the challenge to Marc Marquez in Barcelona this weekend, after his strongest showing of the year at Mugello two weeks ago.

Lorenzo led the majority of the Italian Grand Prix and didn’t give in easily when Marquez passed him, fighting hard with his compatriot. It was only when Lorenzo went wide on the final corner that he conceded defeat to the reigning World Champion, who had the superior speed on the stretch to the line.

Lorenzo proclaims Montmelo is one of his favourite tracks, a circuit he beat Marquez at twelve months ago and feels strong ahead of Sunday’s race. The Mallorcan acknowledges both himself and Yamaha need to make further steps forward if they’re to challenge Marquez of victory, but he is confident of this happening.

“In Mugello I tried my best, I felt stronger and I think we did a really good job” said Lorenzo.

“We were really close to the victory and my physical condition improved a lot compared to the last races. The bike also worked well and I guess if we can do a step ahead either with the bike or my physical condition we will fight again for the victory. Now we are at Montmelo, one of my favourite tracks like Mugello and I would like at least to be on the podium. Last year we could find a good pace for the race and I remember we won in front of the two main rivals, achieving a great win. Hopefully this season we can fight once again; that would be so special considering Montmelo is like my home race. I’m looking forward to racing in Barcelona in front of all the crowd!”