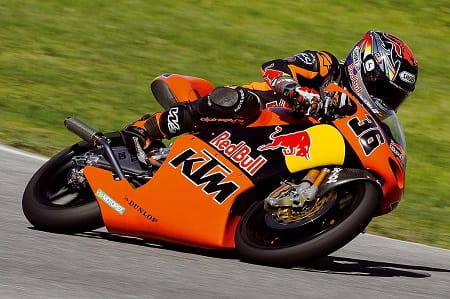 KTM’s Head of Motorsport, Pit Beirer, has confirmed that the Austrian manufacturer intends to enter the MotoGP World Championship in 2017.

While KTM has long been involved in the junior Grand Prix categories, the manufacturer has never entered a full factory effort in the premier class but did support Team Roberts with 990cc KTM engines for a short period in 2005.

Beier says KTM considered developing a chassis for Moto2 but weren’t keen on the idea of using non-KTM engines so have therefore opted to go all out and develop a 1000cc machine for MotoGP. The bike, which will be entirely built in Austria, will feature KTM’s trademark tubular frame and is expected to be powered by a V4 engine with testing expected to commence next summer.

"I can absolutely confirm that we have had a board decision at home at KTM that we could make the big step into MotoGP” said Beier.  “We had plans to go first to Moto2 somehow and grow maybe in smaller steps, but it doesn’t make a lot of sense to build a KTM with a Honda engine inside so it would never be a real KTM. So we decided to make the big jump and go into MotoGP. We are already very busy with this and we are trying everything to get ready for 2017.

"It will be a real KTM, with the engine concept we are pretty sure it’s going to be a V4, but in the end this will still be in a tubular frame, it will be with WP Suspension, and it will be 100% built and made in Austria with KTM, so we are not looking for external suppliers to build the bike for us.

"We want to make it a real KTM and go definitely the hard way. We know it will be a really tough project for us and we will need years now to step into the class and to be ready. But I’m also sure that with our engineers at home we are able to do it. It’s a long term project. We are at the very beginning, but we are looking forward to being part of the big show in the motorcycle world, because MotoGP is a dream for any manufacturer, to be part of the highest level of bike racing in the world. That’s our target."

KTM enjoyed a number of victories in the 125cc and 250cc categories and clinched the 125cc Constructors’ title in 2005. When the four-stroke era arrived in 2010 (Moto2) and 2012 (Moto3), KTM focused their efforts on the entry level, 250cc Moto3 class as the intermediate (Moto2) category was to be governed by a one-make engine rule with the contract awarded to Honda.

KTM’s efforts were rewarded in the inaugural Moto3 season with Sandro Cortese taking the riders’ crown by over 100 points. In 2013 the marque obliterated its rivals with KTM-powered machinery taking victory in every race. The highest non-KTM in the overall championship standings languished in sixth position.

KTM will be the third new/returning manufacturer to MotoGP in the next three years with Suzuki and Aprilia making their Grand Prix comebacks next season.