Four in a row for Marquez as rivals unable to respond 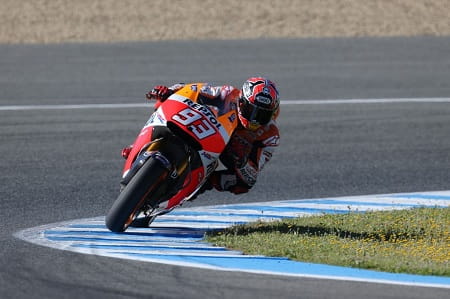 Marc Marquez stormed to a dominant fourth successive victory in Jerez yesterday as his on-form rivals trailed behind unable to find an answer for the World Champ. On Saturday in qualifying, Marquez made it a clean sweep taking his fourth pole position of the season ahead of Jorge Lorenzo and Dani Pedrosa.

After the early battles in Argentina, there were high hopes for the opening laps at Jerez and we weren’t disappointed, with Dovizioso diving into turn one first from the second row of the grid. It didn’t last for long though, as the Italian was soon barged out of the way by the charging pair of Marc Marquez and Valentino Rossi. It wasn’t the best of starts for Jorge Lorenzo and Dani Pedrosa, who have traditionally been strong at Jerez, settling into fourth and fifth respectively on the first lap. Rossi took the lead from Marquez towards the end of the first lap, the Repsol Honda man not too pleased with this immediately made an attempt to claim it back. Marquez secured the lead again shortly on lap three, only to go wide letting both Rossi and Lorenzo, who by this point had picked off Dovizioso for third place, past. Biting straight back, Marquez shot past Lorenzo and then took the lead from the leading Yamaha of Valentino Rossi on lap four at Dry Sac.

As would be expected, Marquez then checked out – building a gap of well over a second by lap six. The order settled out as Marquez, chased from afar by Rossi with Lorenzo and Pedrosa in the background. There was drama with the already-injured Cal Crutchlow a third of the way through the race as he retired to the pits slapping the tank of his Ducati Desmosedici, reports following suggested the Brit had suffered a front brake failure. Ducati’s bad luck didn’t stop there, with Andrea Iannone crashing out on the following lap. 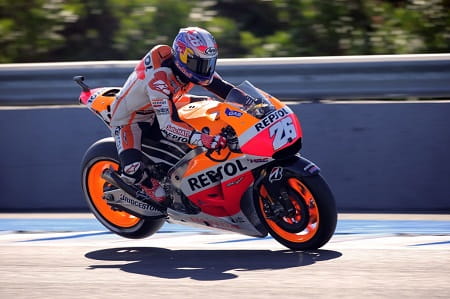 With five laps to go, unhappy with settling for fourth place, Dani Pedrosa passed Jorge Lorenzo in a late race charge which then saw him chase down second placed Valentino Rossi. It was a big ask for Pedrosa to both catch and pass the Doctor, who is notoriously difficult to pass. Despite the Honda’s faster pace, the little Spaniard couldn’t even show Rossi a wheel. A defensive last lap from the Italian secured his second podium of the season for Movistar Yamaha. Jorge Lorenzo crossed the line deflated in fourth place ahead of Andrea Dovizioso and Alvaro Bautista, the Go&Fun Gresini man finishing for the first time this season. Aleix Espargaro secured seventh ahead of Bradley Smith and Pol Espargaro with a disappointing ride from Stefan Bradl rounding out the top ten. Bennetts-backed Scott Redding finished thirteenth while the final Brit, Michael Laverty crossed the line just outside the points in sixteenth.

There were strange happenings in Moto2 with MotoGP’s first all-non-Spanish podium in as long as most people can remember. Mika Kallio took the victory for the Marc VDS team ahead of Swissman Dominique Aegerter and Jonas Folger. 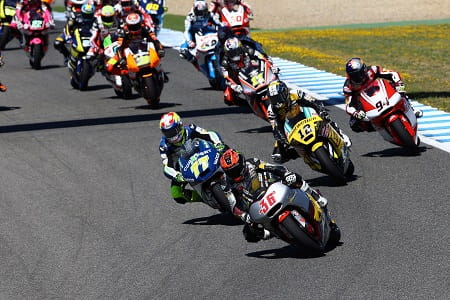 Catch up with MotoGP on your tellybox this evening, with an hour’s worth of highlights over on ITV4 and don’t forget to tune into BTSport 1 at 8pm on Tuesday for MotoGP Tonight, featuring Britain’s own Bradley Smith and Michael Laverty joining show hosts Craig Doyle and Iwan Thomas.