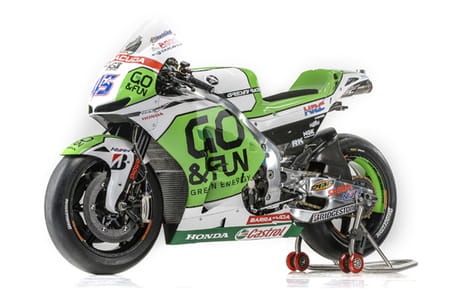 GO&FUN Gresini Racing has revealed the first images of Scott Redding's 2014 MotoGP bike, just under a week before the twenty-one year old takes to the track for the first time this year in Sepang.

Redding signed with the Fausto Gresini squad to ride an Open Class Honda RCV, which is largely based on the bike that took Scott's former Moto2 rival, Marc Marquez to the MotoGP World title last year.

Michael Bartholemy, Redding's manager told Bike Social the Brit had a number of options in MotoGP, including a factory ride with Ducati but opted to go with Honda as the Japanese manufacturer presented Redding with the best chance of being competitive. The deal includes the possibility of a factory Honda ride within the Gresini team for 2015.

Pre-season testing for MotoGP gets underway in Sepang next Tuesday.