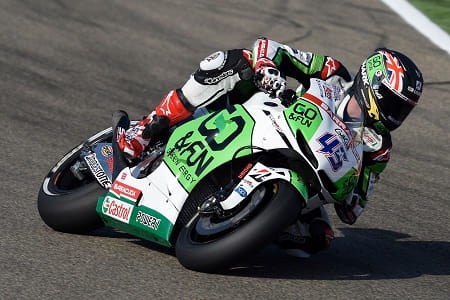 Britain’s Scott Redding might have bagged a sold top ten result in today’s MotoGP race at the Motorland Aragon circuit but the GO&FUN Gresini Honda rider reckons it could have been even better had he not been caught out by the weather.

Redding was by far the fastest production Honda before the rain came down in today’s race, latched on to the back of compatriot Bradley Smith aboard a factory-spec Yamaha. When the rain came down with ten laps to go, Redding struggled for grip on the soft rear tyre losing positions to Hiroshi Aoyama and Nicky Hayden who pitted for rain tyres earlier than the Brit.

“We were having a good race today until the rain came down” said Redding, talking to Bike Social after the race.  “I used the soft rear tyre which is what gave me the advantage early on. I’d managed to make good progress but then the rear started to spin up a lot and, when the rain came, I had no edge grip on corner entry so lost a lot of time there. When the rain came down and we changed bikes it took me a couple of laps to scrub in the wet tyre.”

Redding got off to a tough start on Friday setting just the 19th fastest time in FP2, he says he struggled to get into a rhythm as he was lacking grip from the front.

“On Friday we struggled to get a rhythm, the front has been feeling a bit strange lately so it took us a bit of time to get going. We made a few changes to the bike and it felt a bit better in qualifying and a lot better in the cooler temperatures today.”

Next up MotoGP heads to Motegi, where Redding dramatically crashed out on the opening lap of the Moto2 race last year ruling him out of the title fight.

“I didn’t have a great time at Motegi last year but it shouldn’t be a problem for this year! I know I lost the championship there but y’know, **** happens so we’ll have to see. It’s not one of my favourite circuits but it’s not the worst. It could be a weak track for us as it’s got a lot of slow corners and long straights but we’ll have to see when we get there.”