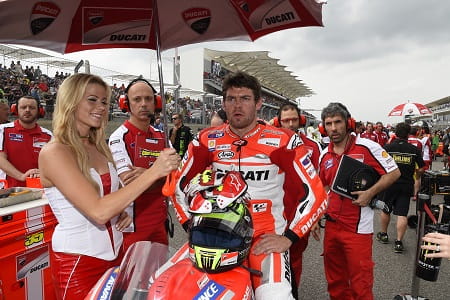 Cal Crutchlow will return to action at this weekend’s Spanish Grand Prix after missing the Argentinian round through injury. The Ducati rider fell during the second race of the season in Austin, injuring his right hand. Originally diagnosed with a dislocated little finger, after further checks it was revealed he had suffered a small fracture to the finger and the decision was taken for the Brit to go under the knife.

He had planned to race in Argentina although after suffering intense pain in his hand he opted to sit the race out. With Jerez the next weekend, rumours had surfaced of Crutchlow sitting out both rounds although it has now been announced he will return to action this weekend after spending some time in the hyperbaric chamber on the Isle of Man to help speed up his recovery.

Crutchlow has said he still has quite a bit of pain in the hand, so will try riding on Friday and then make a decision about whether he will continue.

“My hand is getting better every day, but I still have some pain and it’s definitely going to be difficult to ride this weekend" said Crutchlow.  "I’ll try and see how it is from Friday and do the best job I can. Jerez is surely one of the toughest circuits to come back and ride at after my crash. It’s a really great track, and the crowd are great as well, but really I’m just excited about joining up with the team again and getting back on the bike.”

The Brit had a strong start to the season in Qatar taking a sixth place finish but struggled with tyre issues in Austin before crashing out.