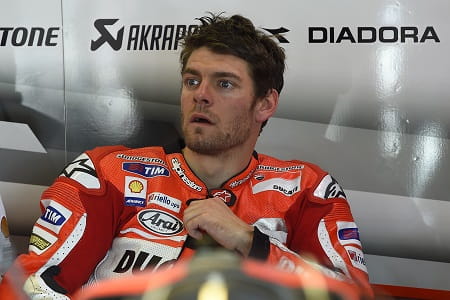 Cal Crutchlow will miss the inaugural Argentinian Grand Prix this weekend following injuries sustained when he crashed out at the Circuit of the Americas last weekend.

The Brit was initially diagnosed with a dislocated right little finger, but further checks at a specialised centre in the USA revealed that the Ducati man had suffered a tiny fracture to the finger, requiring surgery. Initially, the plan had been to attempt to ride this weekend but continuing pain in his right hand, which prevents him from using the brake properly, has forced him to sit out of the round.

He’ll be replaced by Ducati’s official test rider, Michele Pirro, at the Autodromo Termas de Rio Hondo this weekend. Crutchlow will return to the UK to recuperate ahead of the fourth round of the MotoGP season at Jerez, to be held between 02-04 May.

“I am very sad to let the team down like this because I was really looking forward to racing in Argentina” said Crutchlow.

“On Tuesday I had some scans on my hand and we saw that my finger was still dislocated from the crash and also broken so Dr. Chao decided to put a pin in to stabilize it. Unfortunately I’m still feeling too much pain in my right hand, my knuckles are the most painful part and I’m not in condition to race this weekend. Now I’m going back to the UK to continue treatment and try and get ready for the race at Jerez.”