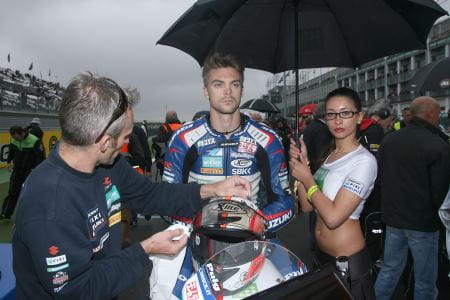 Britain’s Leon Camier will not be riding this week at the second pre-season MotoGP test in Sepang after his IODA Racing Aprilia team has lost its title sponsor, CAME. Camier signed with the Italian outfit to ride an Aprilia ART alongside Danilo Petrucci but now, it would seem funding difficulties are set to prevent the twenty-seven year old from making his MotoGP debut.

Camier and Petrucci missed the first Sepang test earlier this month with the team claiming the bikes weren’t ready but Aprilia have since denied this, saying the bikes are ready and will be delivered upon receipt of payment. Both riders are now set to miss the second test as well.

With rumours suggesting that IODA will only take Petrucci to the Qatar test next month, Camier’s MotoGP future could well be in doubt. The 2009 British Superbike Champion was in Australia last week visiting close friend, Casey Stoner but sources suggest the former Crescent Suzuki rider was also present at Phillip Island this weekend, where the first round of the 2014 World Superbike championship was taking place.

Although with pretty much no rides left in the World Superbike series, it’s hard to see where a seat could arise for Camier should his MotoGP deal not come off. Perhaps a return to British Superbikes is on the cards?