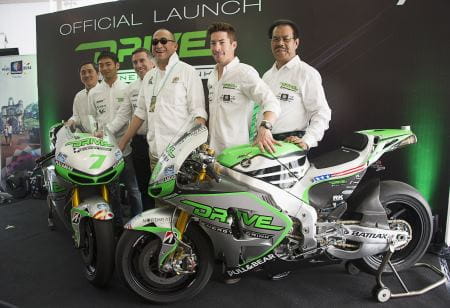 The Aspar MotoGP team has unveiled their 2014 livery in Sepang on the eve of the second MotoGP test. Switching from Honda to Aprilia machinery for the season ahead the Spanish outfit also welcome a new title sponsor, Malaysian energy drink ‘Drive M7’, which forms the basis of the team’s livery.

Aspar’s two RCV1000R Honda production racers will certainly stand out in the 2014 MotoGP field, as the new livery contains both silver and bright green. The team’s riders, Nicky Hayden and Hiroshi Aoyama will be looking for significant improvements over the next few days in Sepang after a tough start at the first test earlier this month.

“The challenge of competing as an open bike and the new rules will be interesting to see how it all plays out and if it really will become the future of MotoGP” explained Hayden.

“The first test we were not as competitive as we need to be but I trust HRC will help us very soon and find us more power. I must get everything out of this new test to learn the bike and the new team and be ready to for the opener in Qatar. I have great fans and great sponsors and hope I can make them proud this year.”

2009 250cc World Champion, Hiroshi Aoyama added: “We have a new challenge this season in the shape of the Open category, which is the future of MotoGP. 2014 will be an interesting and important season for us. I have a great team, a great bike and direct support from Honda, so I am sure it will be a good year.”