Another tough weekend for Ducati pair in Le Mans 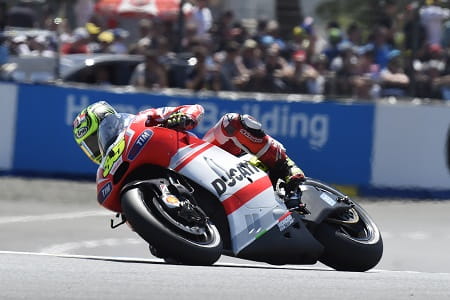 It was another tough weekend for Ducati’s MotoGP team in Le Mans this weekend as Andrea Dovizioso and Cal Crutchlow finished eighth and eleventh respectively.

The weekend started well for Dovizioso who was able to run fast times on the extra-soft tyre. The Italian qualified third on the grid for Sunday’s races and even took the lead in the early laps before falling back through the field.

“At least I tried!” Dovizioso said after the race. “I made a great start and tried to pull away as much as possible, but after a few laps I could see that I would never have a chance to fight with the frontrunners.

“It’s a pity, but for the moment our gap is still too big, and even if we grit our teeth, we can’t make any strategies or push hard in certain moments of the race. Even after my third quickest time in qualifying yesterday I knew that today was going to be difficult. Now we have to think of our home race at Mugello, where we’ll try and get a good result.”

It was an even tougher weekend for Cal Crutchlow who crossed the line eleventh after a challenging race. The Brit was glad to cross the line though, after failing to finish in Austin and Jerez and missing Argentina through injury. Being hit by another rider and early race mistakes held Crutchlow back but he acknowledges even without this, it’d have been a tough act.

“Today it was important first and foremost to finish a race, and for me that’s good seeing as how my 2014 season has been so far” said Crutchlow.

“I got a great start and felt really good on the bike, but there was a crash on the first lap and I got hit really hard by Hernandez by accident, which gave me a dead leg, and I lost a few places. I also made a few mistakes in the race but it’s clear that for the moment it’s difficult for Ducati to aim for anything higher in the results. A big thanks to my team, who are working really hard for us to become competitive, even though the result is not what we hoped for.”