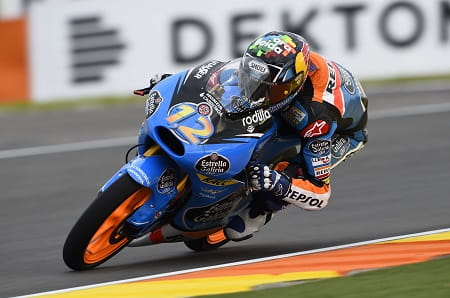 Alex Marquez has been crowned 2014 Moto3 World Champion after an intense final race of the season in Valencia.

Marquez led title rival Jack Miller by 11 points into the final race, meaning Miller would need to finish first and Marquez fourth for the Australian to clinch the title.

Leading into the first corner, Miller’s intentions were clear although it wouldn’t be that simple for the KTM man. The battle for the lead soon became an eight bike train and it didn’t take long for things to get messy. A number of rough moves duffed up both Miller and Marquez, at one point leaving them as low as 6th and 8th respectively.

Miller was two seconds behind race leader Isaac Vinales with three laps to go and put in an incredible performance to catch and pass the Spaniard before the end of the penultimate lap. However, it wasn’t enough for the Aussie with rival Alex Marquez sitting in third position.

Miller’s Red Bull team mate, Danny Kent was sat close behind Marquez on the final lap but a mistake into turn twelve put pay to any chances of the Brit helping out.

Marquez’ title means that he and brother Marc are the first riders to win Grand Prix World Championships in the same year.