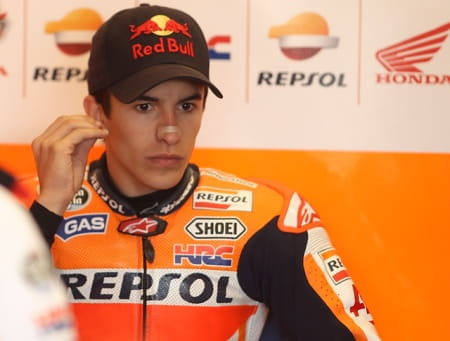 Marc Marquez is MotoGP's latest phenomenon. He's just twenty years old and has taken four victories in his debut season in the elite series. After ten rounds, the Spaniard leads the championship from his more experienced team mate, Dani Pedrosa. We put your questions to the Repsol Honda man, and here's what he had to say:

Do you ride any bikes on the road?

No, I don’t have a road driving license for bikes!

I like Pop / Rock music in general, but don’t really have a favourite group

How does it feel to get your elbow down?

In Moto2 I use to ride in a similar way, but this year, with MotoGP, it’s a bit more exaggerated. But it’s my style; I mean that I do it that way because it feels natural that way

Have you surprised yourself with your performance in MotoGP?

Obviously yes, I didn’t expect to start this way. Apart from this, the aim this year is still the same: work very hard and continue learning together with the team

Do you think your brother will follow in your footsteps?

I hope so! I don’t know. What I can say is that when I was his age, I wasn’t as strong as he is. He’s starting quite hard.

How did you start racing?

I rode my first bike when I was 4. I started doing endurance and motocross.

What's been the scariest moment in your career so far?

The injuries in general, but the worst one was the one I suffered to my eye.

Who from Moto2 do you think could be fast in MotoGP?

I don’t know.. There are some very good riders in Moto 2!